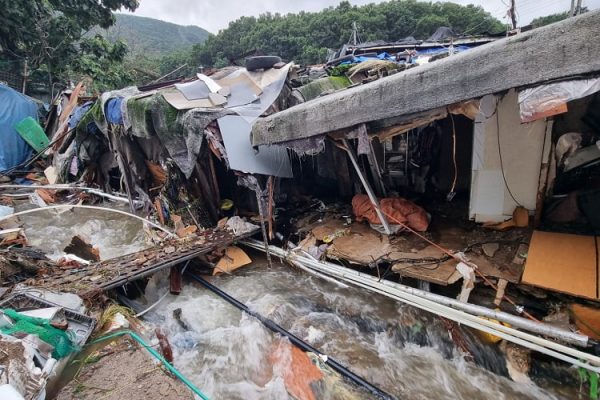 Ten locations were designated as special disaster zones, including Yeongdeungpo-gu and Gwanak-gu in Seoul, Gaepo 1-dong in Gangnam-gu, and Buyeo-gun and Cheongyang-gun in Chungnam.

Following a preliminary investigation into the regions affected by heavy rains at the beginning and middle of this month, the Ministry of Interior and Safety announced on the 22nd that 10 local governments that are certain to meet the requirements for declaring special disaster areas were first declared special disaster areas with the presidential approval.

The decision to declare a special disaster area first, prior to the central joint investigation, was made because it was determined that preventative measures at the government level were required for the prompt recovery and recovery of damage from heavy rain, according to the Central Disaster and Safety Countermeasures Headquarters. By the end of this month, a joint investigation will be carried out in other places that haven’t been declared this time, and further specific disaster zones will be proclaimed as soon as the conditions for the designation are satisfied.

Local governments designated as exceptional disaster zones can lessen their financial burden by allocating between 50 and 80 percent of the rehabilitation costs for damaged private and public buildings to the state budget. Along with the catastrophe subsidy, victims will also receive 12 other indirect advantages, such as exemptions from national and municipal taxes, reduced public charges, and more (regardless of whether or not a special disaster area is declared).

In addition, the local government intends to pay the disaster subsidy for flooded homes, etc., for which damage has been certified, even before a rehabilitation plan is established, in light of Chuseok’s impending arrival.

In addition to designating a special disaster area, the Ministry of Public Administration and Security also issued a total of 10.7 billion won in special disaster and safety taxes to enable local governments to quickly address urgent issues like the removal of an apartment buildings collapsed retaining wall in Dongjak-gu, Seoul.

The Central Disaster and Safety Countermeasures Headquarters’ Lee Sang-min stated, “I hope that this special disaster area priority declaration would allow the local governments promptly restore damage before Chuseok, and help the victims to everyday life and return to livelihood.” To stop the same damage from happening again, we will examine it and create a long-term healing strategy.