A Warehouse in U.S .Received 13,000 Disciplinary Notifications From Amazon 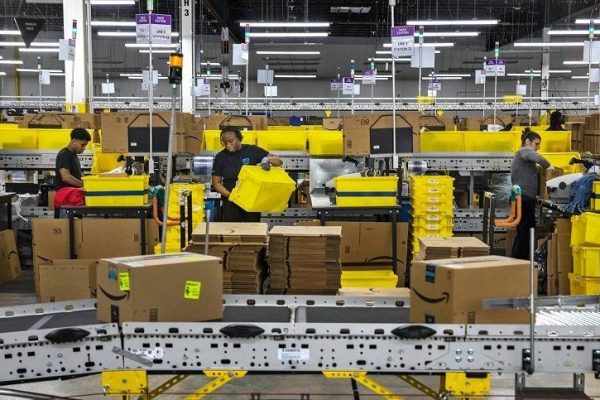 Gerald Bryson, an Amazon employee, had spent three days manually counting thousands of products in his warehouse’s inventory when his boss handed him a “Supportive Feedback Document.”

According to the 2018 report, Bryson had made 22 mistakes, including counting 19 items in a storage container that really contained 20. The notification warned that Bryson would lose his job at the Staten Island warehouse, one of Amazon.com Inc’s (AMZN.O) biggest in the United States, if he made mistakes like this six times in a year.

Internal Amazon records that have never before been made public show how often the business evaluated each employee’s performance down to the last detail and reprimanded those who fell even marginally short of goals, sometimes even before their shift was over. One attorney for Amazon claimed in court documents that over the one year ending in April 2020, the business issued more than 13,000 alleged “disciplines” at only Bryson’s facility. Around that period, there were 5,300 workers at the factory.

Records and interviews with current and past employees reveal the intense pressure Amazon line workers endure to execute duties as fast and correctly as the firm requires. Some workers told Reuters that this climate has sparked unionization campaigns throughout the nation. The Amazon Labor Union, an independent labor organization established in April 2021, reports that employees from more than 100 other facilities nationwide are attempting to emulate Bryson’s workplace, which voted in March to become Amazon’s first organized warehouse in the United States.

The biggest online retailer in the country, Amazon, provided these documents in response to an NLRB complaint on the termination of Bryson in April 2020. Many of these records were also part of a different, ongoing federal court case in which the National Labor Relations Board (NLRB) attempted to end what it termed Amazon’s “flagrant unfair labor practices”; the corporation refuted these claims in court filings.

The objectives established by Amazon are “fair and based on what the majority of the team is really completing,” according to a statement. The business claims that it gives employees more compliments than complaints. In order to support workers’ success and ensure that they are aware of expectations, Amazon says that it provides them with a lot of feedback throughout the year.

The National Labor Relations Board (NLRB), according to Kathy Drew King, regional director of the Brooklyn office, “has fiercely pursued” Amazon’s compliance with the law.

This April, an administrative law judge mandated Bryson’s reinstatement after concluding the shop had wrongfully dismissed him for objecting to workplace safety regulations. Amazon said in a statement that it fired Bryson for disparaging a coworker during a rally in the warehouse parking lot, and the corporation is appealing the judge’s ruling. Bryson said that the worker had abused him verbally.

Bryson, who is now a union organizer, adding that he is unsure whether he would go back. The employees will see that they can fight if I go back through those doors, he continued.

In Bryson’s case, Amazon informed the court that it could not comply with NLRB requests in a subpoena to provide the hundreds of disciplinary letters it sent to workers that year, describing the request as “unduly onerous.”

However, it gave over a large number of personnel files and supplied figures for what it referred to as “disciplines” at three warehouses, which include dismissals, suspensions, and warnings. Between 2015 and 2021, there were more than 600 favorable, negative, or neutral notes for employees. Whether the notifications were a representative sampling of the company’s comments cannot be determined from the documents. Affidavits from employees and emails between Amazon and government attorneys were also included in the data.

The following are a some of the reported offenses for which Amazon faulted staff:

* In June 2018, a warehouse worker from Carteret, New Jersey, got a reprimand at 2:57 a.m. while working the same shift for being off task for six minutes.

* Achieving 94% rather than 100% of the company’s productivity target. A worker at the same New Jersey facility has consistently outperformed expectations for weeks. However, Amazon management sent him a termination threat in October 2017 if he didn’t increase his pace of scanning and certifying products, which fell to 164 per hour, below the desired level of roughly 175 per hour.

* We went four minutes over our break allotment. The same New Jersey employee who was penalized for productivity also got a write-up in March 2017 warning him not to go over the allotted “5 minute walking grace” period for breaks.

* Making four mistakes while taking things that consumers had requested in a single week in the spring of 2019 in New York City, but picking more than 15,800 items properly for customers.

Amazon said in its statement that these accounts did not fully represent its most recent rules. The business said in a blog post from June 2021 that it started averaging employees’ “time off task”—periods of inactivity—over a longer period before getting in touch with staff. It did not state how the time frame was extended. Amazon said that certain managers had improperly used punishment in instead of “teaching” employees.

Less than 25% of comments are about “potential for improvement,” according to Amazon’s reply to Reuters, and the bulk of them concern attendance, such as when an employee would go over their permitted vacation time.

Reuters was unable to confirm the numbers because there were no complete records of business notifications.

The sheer number of “disciplines” listed by Amazon in court documents, however, implied they were many. According to the counsel for Amazon, management at a warehouse in Robbinsville, New Jersey, with an average of around 4,200 workers as of December 2020, disciplined workers more than 15,000 times in the year before April 2020. In the calendar year that ended in April 2020, a warehouse in North Haven, Connecticut, with an average workforce of 4,800 as of December 2020, issued more than 5,000 such notifications. Numerous disciplinary notifications were sent to several specific workers.

Despite his best attempts, according to Bryson, to satisfy Amazon’s requirements, a mountain of negative reviews followed him about. Shortly after the Staten Island warehouse’s doors opened in 2018, he began working there for a starting wage of $16.50 per hour. He had to use a scanner in the form of a pistol to count bin after bin of screws, bolts, and other stuff.

Bryson said that he slowed down to ensure that the count was accurate after initially receiving written caution about inaccuracies. He received criticism for counting 295 products per hour on December 6 of that year when the corporation had anticipated 478. He admitted to Reuters that he struggled at his kitchen table over whether his performance was good enough and attempted moving twice as quickly to make up for a slow day.

Because your rate is lower than it should be, you’re worrying about whether you’ll have a job tomorrow, Bryson, now 59, remembered. “It was awful.”

Even after he accelerated to an hourly rate of 371 that month, he still received two additional write-ups, according to the Amazon papers. Bryson said that he just continued “counting and moving and counting and moving,” and that this caused him to get further written warnings. In the end, he quickly and accurately processed roughly 8,000 goods in four days in January 2019 to get Amazon’s accolades.

He was informed that his most recent work performance “meet or surpassed productivity goals.”

Bryson said that just going from his vehicle after work to his apartment made him feel as if he were “1,000 years old,” adding that his feet swelled and his body hurt.

Workers have recently attracted to the massive store because it offers pay that is often greater than that of its largest competitors. In order to recruit in a competitive labor market, Amazon said in September that it had increased the average starting wage for U.S. operations personnel to more than $18 an hour, or roughly 10% more than Walmart, the biggest private employer in the nation, was paying at the time.

But at least two workers claimed in the court documents that the task had an emotional cost. In November 2019, when a management questioned him for quitting his position, Roshawn Heslop, a ship dock worker in North Haven, said that tension caused him to lose his cool. According to an account of the event provided by human resources, Heslop stated, “I’m doing my f*cking job.” The manager was doubtful of Heslop’s claim that he had gone to fetch a tool, according to HR documents.

Heslop said in HR records that he was generally “a quiet man,” “here to work,” and sometimes goes for walks due to a health problem. The manager encouraged the business to punish Heslop for using foul language in three emails to HR, and the business ultimately did. He was put on probation, and if he didn’t perform, he may lose his job.

Even if articles like that are rare, Amazon said that “we do not accept, at any level, improper conduct” and that “it is crucial to treat one other with respect.”

Heslop, 28, who is still employed at Amazon, claims that the business itself doesn’t value people like him.

He stated, “It doesn’t matter how hard I work or how well I work.” It’s an impossible game to win,