According to Ukraine, Russia Begins Heavy Bombardment Ahead of a Fresh Attack 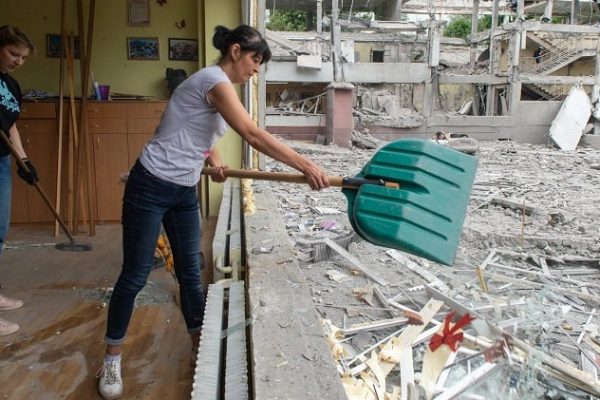 Ukraine’s general staff said on Monday that Russia started firing artillery, multiple rocket launchers, and tanks near Kharkiv, the country’s second-largest city, and blasted towns in the east where a previous attack had killed 15 people in an apartment complex.

Overnight, a missile struck an apartment building in Kharkiv, but no injuries were recorded, according to the authorities.

15 people were murdered and 20 more were reportedly trapped in the debris of a five-story apartment building in the eastern village of Chasiv Yar on Saturday night.

Andriy Yermak, the chief of staff to President Volodymyr Zelenskiy, called the incident “another terrorist act” and said that Russia ought to be labeled as a state supporter of terrorism.

Moscow maintains that it does not target people, yet following Russian bombing of Ukrainian cities, towns, and villages, the only safe havens for the survivors were basements and bomb shelters.

On Sunday, rescuers in Chasiv Yar lifted a concrete slab with a crane and dug through the rubble with their hands while groggy inhabitants who had survived the bombardment collected personal items and related tales of their escape.

One lady was observed leaving the demolished structure while toting an umbrella, a plastic shopping bag, and an ironing board. Others only observed the rescue operations while dreading the worst as the deceased were taken away.

A tenant identified as Ludmila claimed, “We raced to the basement; there were three impacts, the first someplace in the kitchen.”

“We fled toward the second door and went directly into the basement the second, I can’t even remember, there was lightning. Up until this morning, we stayed there all night.” Venera, a different survivor, said she had wished to preserve her two cubs.

She stated, sobbing, “I was shoved into the bathroom, it was all commotion, I was in shock, and I was all covered in blood.” “The room was covered in debris when I finally emerged from the restroom; three stories had collapsed. Under the debris, I never discovered the kittens.”

On February 24, Ukraine was invaded by Russia under the leadership of Vladimir Putin, who described the war as a “special military operation” aimed at demilitarizing Ukraine and purging it of nationalists.

Putin’s campaign, according to Ukraine and its Western allies, is an imperial territory grab, and his soldiers have been charged with war crimes. Moscow disputes any assault on civilians.

Thousands have died, villages and cities have been destroyed, and more than 5.5 million Ukrainians have fled their nation as a result of the worst war in Europe since World War Two.

In an effort to seize control of the Donbas industrial core, Russian troops, according to the general staff of Ukraine, have initiated a round of bombardments in the east.

It claimed that the extensive bombardment served as a prelude to an escalation of hostilities.

The Kremlin has claimed victory in the province of Luhansk in the Donbass, and Russian forces are now focusing on taking over the nearby city of Donetsk.

Putin has pledged to give pro-Russian rebels in the Donbas who have proclaimed their independence from Kiev control of the region.

In the face of overwhelming opposition supported by Western weapons, Russia abandoned an early push on the Ukrainian capital of Kyiv.

Iryna Vereshchuk, the deputy prime minister of Ukraine, gave no specific timescale for action in her warning to inhabitants in the Russian-occupied Kherson area on Sunday to leave immediately.

She said on national television, “I know for sure that there should not be women and children there, and that they should not become human shields.