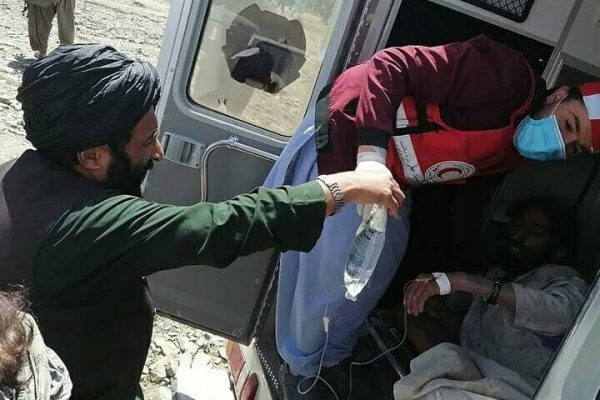 A top official claimed that Afghanistan does not have enough medical resources to heal the injured from an earthquake that killed 1,000 people this week, as an aftershock killed five more people on Friday.

Authorities had previously called off the hunt for survivors of the 6.1 magnitude earthquake that occurred early Wednesday, around 160 kilometers (100 miles) southeast of Kabul, near the Pakistani border.

The magnitude of the Friday earthquake, which occurred almost precisely in the same location, was 4.3, according to the US Geological Survey.

According to Mohammad Nassim Haqqani, a disaster ministry official, around 2,000 people were injured and 10,000 dwellings were partially or fully demolished in the Wednesday earthquake.

“The health ministry does not have enough medications; we require medical help and other essentials since this is a major calamity,” he explained.

The epicenter of Wednesday’s earthquake occurred in an area of parched mountains populated with tiny communities that was frequently the site of skirmishes during Afghanistan’s decades-long conflict.

The aftershock killed five people, according to a health ministry official, although there was no immediate news on the amount of further damage and casualties.

Poor communications and very rudimentary roads have impeded aid operations in a country coping with a humanitarian catastrophe that worsened significantly after the Taliban took control last August when US-led international forces retreated.

The calamity is a big test for hard-line Islamists, who have been essentially isolated; ostracized by many due to concerns about human rights, and cut off from much direct foreign aid due to sanctions.

India, which has a tense relationship with the Taliban, said it had provided 27 tonnes of supplies on two aircraft for distribution to foreign assistance organizations.

Before the aftershock, Haqqani reported the hunt for survivors had been called off 48 hours after the tragedy happened.

“The hunt is concluded,” he stated.

He did not explain why. After much longer time, people have been retrieved alive from the ruins of past earthquakes.

Because the Indian plate is pushing north towards the Eurasian plate, large regions of South Asia are seismically active.

An earthquake devastated the distant Afghan northeast in 2015, killing hundreds of people in Afghanistan and neighbouring northern Pakistan.