As Typhoon Hinnamnor Moves On, South Korea Suffers a Death Toll of Almost a Dozen People 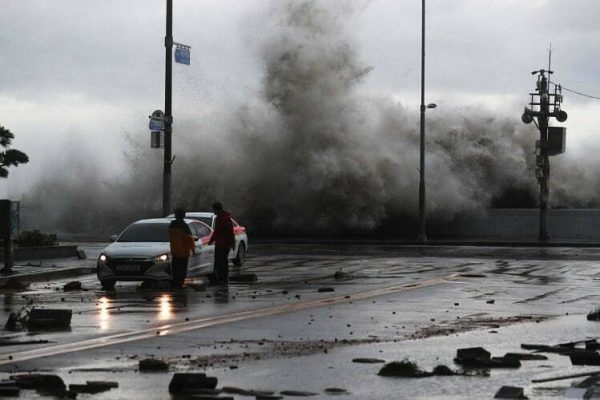 After passing South Korea on Tuesday, Typhoon Hinnamnor caused devastating devastation to communities along the east coast and claimed the lives of at least a handful of people.

At 6 o’clock, three persons were known to have died and nine were still missing.

On Tuesday morning, government officials confirmed one death and two disappearances. In the late afternoon, however, the administration released a revised total that indicated three dead and nine missing individuals.

Since the first complaint, seven more residents of the Pohang, North Gyeongsang Province, apartment complex have gone missing. A number of the missing persons are said to have gone into an underground parking garage at an apartment complex in order to relocate their automobiles after the garages were inundated. Another Pohang resident was discovered deceased in an underground parking lot while attempting to relocate her car.

As of 6 o’clock on Tuesday, the death toll had risen to three with the discovery of an 80-year-old woman’s body in Gyeongju.

While the hunt continues for the missing, President Yoon Suk-yeol is reportedly thinking about making a trip to Pohang.

As soon as South Korea was free of the typhoon’s effects in the afternoon, the nation rushed up its evaluation of damage caused by the storm.

The Korea Meteorological Administration reports that the super typhoon blew by Jeju Island at midnight and made landfall on the southern coast of the nation around 4:50 a.m. on Tuesday. By 7:10 a.m., the typhoon had once again retreated to the open sea.

Near Ulleung Island, which is located east of the Korean Peninsula, Typhoon Hinnamnor accelerated to a northeasterly speed of 62 kilometres per hour around 9 a.m. on Tuesday. At its core, the typhoon generated winds of up to 37 metres per second and had an air pressure of 965 hectopascals.

At roughly 3 p.m., the eye of Typhoon Hinnamnor was predicted to pass 330 km off the northeastern shore of Ulleung Island, and by 9 p.m., it would be a mere 420 kilometres from Sapporo, Japan.

As it nears Sapporo, the typhoon is forecast to significantly weaken and transition into an extratropical storm, according to the state meteorological bureau.

South Korea followed suit, lifting typhoon warnings throughout the nation by early Tuesday afternoon as the storm weakened and retreated from the coast.

Heavy rains fell in the southern half of the nation and on Jeju Island after Typhoon Hinnamnor made a relatively brief impact.

According to the National Fire Agency, 13 persons were saved from nine separate mishaps that occurred when Typhoon Hinnamnor was in the area.

According to Korea Electric Power, 66,341 residences lost electricity due to the storm, but power has been restored to around 45 percent of those locations.

A total of 2,906 persons, from 2,141 houses, were evacuated temporarily due to safety concerns. Over 1,600 individuals in South Gyeongsang Province were rescued, with another 697 from South Jeolla Province. A total of 379 persons in Busan were forced to leave their houses. Three persons from two residences in Seoul were reported as having temporarily relocated.

As of 3 p.m. on Tuesday, 71 homes and 8 business buildings have been flooded around the country, with 4 homes having been damaged.

Woo Jin-kyu, a senior expert at the meteorological service, claimed that the nation may have been spared significant damage from the typhoon if the winds had been less intense. Woo emphasised, however, that the winds were still powerful enough to do substantial damage, and that the days of preparation ahead to the typhoon’s arrival mostly prevented the nation from suffering catastrophic damage, as was the case with Maemi in 2003.