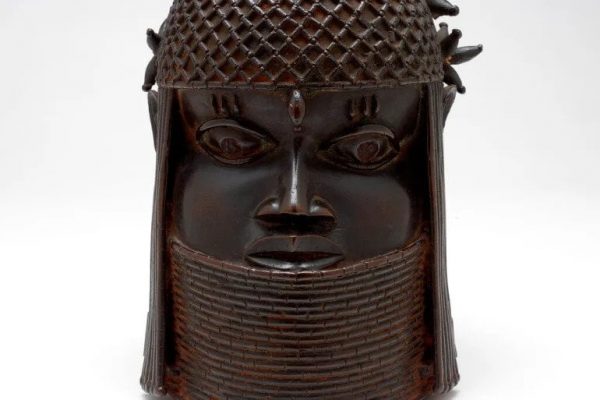 During the ceremony that took place on Tuesday at the Smithsonian Institution in Washington, District of Columbia, one of the items that was transferred to the Nigerian National Collections was a sculpture known as the Head of a King, or Oba. This sculpture had been on display at the Rhode Island School of Design Museum (RISD).

The kingdom of Benin, which is located in what is now the country of Nigeria, was pillaged and robbed by British colonial troops in the year 1897, and the Benin Bronzes were taken at this time.

Sarah Ganz Blythe, the interim director of the RISD Museum, stated in a statement that in 1897, the “Head of an Oba” was taken from the Royal Palace of Oba Ovonranwmen.

Blythe said that the RISD Museum has collaborated with the Nigerian National Commission for Museums and Monuments to return the sculpture to its rightful owners, the people of Nigeria.

Lonnie Bunch III, the founding director of the Smithsonian National Museum of African American History and Culture, remarked on Twitter that “today, we remedy a historic injustice by returning the Benin Bronzes, wonderful specimens of Benin’s culture and history.”

“We recognise a tradition of cultural theft via our repatriation, and we do our share to restore African culture to its rightful owners, the African people.”

Lucy Truman Aldrich donated the artifact known as the Head of a King to the RISD Museum in 1939. It is thought that the item dates back to the 1700s. According to a statement released by the museum, it had been purchased in 1935 from the Knoedler Gallery in New York during an auction of artefacts hailing from the Kingdom of Benin.

The presence of a customs stamp from France on the inside of the book provides evidence that it was formerly part of a collection in France.

Even though the RISD Museum has not been able to link the sculpture to a particular collection in France or the United Kingdom, it is almost clear that the sculpture is one of the stolen pieces. The museum made this assertion.

The head is made of bronze and depicts an oba, or ruler, of the Edo people who lived in Benin, which is located in West Africa. According to the museum, the statues were put on ancestral altars inside the royal palace after being commissioned by a new monarch as a way to honor the reign of the previous king.

This repatriation is part of a larger effort by cultural organizations all around the globe to return artifacts that were taken during times of colonial conflict.

In August, Germany concluded a contract that would give Nigeria ownership of the Benin Bronzes that are now on display in German museums. The collection was said to be the largest substantial transfer of museum artifacts from a colonial setting to date, and it contains 512 pieces that found their way to Berlin as a result of the theft that occurred in 1897.

During the same month, the Horniman Museum and Gardens in London made the announcement that they would be giving a collection of 72 Benin Bronzes to the government of Nigeria.

Abba Isa Tijani, director-general of Nigeria’s National Commission for Institutions and Monuments, expressed her hope that other museums may be motivated to return African artifacts as a result of the most recent transfer.

In a statement, he added, “we aim for tremendous relationships with these museums and organizations, and we have already initiated promising negotiations with them over this.”

“Anyone from anywhere in the globe is free to participate in this fresh approach to old problems. A path that is devoid of recrimination and second thoughts. A path brimming with regard for one another.”