COVID is Widespread in China, and Hospitals Are Overburdened 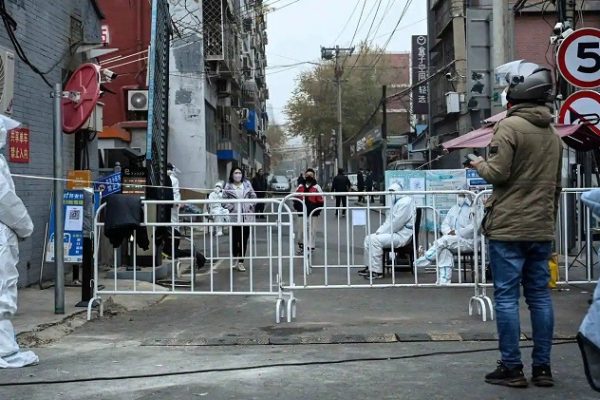 Beijing’s coronavirus hotlines are clogged, Guangzhou’s hospitals are at capacity, and in Hebei province, hospitals are operating with just a third of their regular workforce. Everywhere in China, COVID-19 is spreading like wildfire.
After three years of zero-COVID were unexpectedly abandoned last week, a flood of relatively mild cases has taxed health resources, prompted a backlog of antigen testing, and caused widespread misunderstanding over procedures.
According to the Beijing Health Commission, 22,000 individuals went to one of the city’s fever clinics on Sunday, an increase of 16 percent over the previous Sunday. On the same day, calls to the city’s emergency center were six times more than usual.

Wang Yong, the deputy director of Beijing’s Emergency Centre, stated, “The call volume is too great, the wait is too lengthy, and callers that genuinely require it may discover the line is full.” Because of this shortage, ambulance services are less effective than they might be.

The government’s own propaganda contributes to the widespread fear. The Chinese Communist Party relentlessly pursued its zero-COVID campaign for a full 36 months, during which time it spread widespread panic about the virus among its people. This was a whole year longer than the average length of time spent doing so by other countries.

Mainland China has escaped the extensive illnesses observed in Europe and the United States, with just 5235 fatalities registered officially (although some experts challenge that statistic). The unexpected reversal of the zero-COVID policy has resulted in a rapid spread of the virus across homes, workplaces, and hospitals, infecting a vulnerable population just as the northern winter sets in.

According to Badian Jianwen, a social media site for the healthcare sector, over 700 medical staff members at 3A General Hospital had either tested positive for COVID or had come into close contact with a COVID-case, wiping out one-fifth of the hospital’s personnel. The Chinese business journal Caixin said that owing to a lack of personnel, over 200 patients had to be transferred from hospitals in Guangzhou to temporary quarantine facilities.

Aside from the service sector, other sectors are feeling the effects of the labor crisis. Appointments at the Australian embassy in Beijing have been canceled till next week owing to the “current COVID situation in Beijing,” the embassy said on Monday.

“The height of the epidemic would bring great strain on the medical system,” Feng Zijian, a former deputy director of China’s Chinese Centre for Disease Control and Prevention, warned.

Throughout the epidemic, the official story out of Beijing was that COVID was transmitted by foreign imports; but, this week, Feng informed students at Tsinghua University that this was no longer the case.

The top government adviser made a dramatic change in message, telling students they could expect to become infected with the milder Omicron strain but not to worry about the virus anymore if they were completely vaccinated.

“This is something that everyone will go through at some point,” he remarked. Please don’t feel bad or blame yourself if you unknowingly infect your hostel or classroom.

Feng recognized the uncertainty brought on by the revised standards, which have resulted in staff shortages across the board because of the isolation of medical personnel who have been classified as close contacts.

“It is vital to strengthen the management style of the hospital in order to safeguard different kinds of patients who are hospitalized and to minimize the burden on employees caused by infection of medical staff,” he added.

No public scenes of panic or deaths have been reported as of yet, but the height of the outbreak is not expected to occur until perhaps in the middle of January or the beginning of March, according to epidemiologists. Due to the pressure on China’s PCR testing process caused by the unexpected loosening of regulations, regulators are scrambling to deliver quick antigen kits to market. On Sunday, the Beijing Medical Product Administration said it had issued 25 million kits to the market.

He told Chinese state media, “Relaxing now is not sudden.”

Wang said, “China will exit the epidemic in a more orderly form than what occurred in the West” because authorities waited until Omicron had become significantly less fatal.

There are still more than 264 million adults over the age of 60 who have not received all recommended vaccinations.