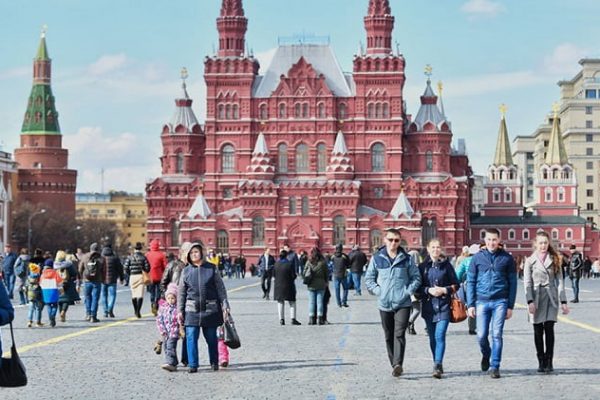 Russia’s population dropped significantly from 148.37 million to 143.25 million between 1993 and 2008. Russia went through a period of low birthrates and unusually high death rates. Since then, the population has grown once again to 145.93 million, but it is anticipated to peak at that number at the end of 2020 and then begin to decline once more.

With 1.58 births per woman, Russia has one of the lowest fertility rates globally, which is lower than the replacement rate of 2.1 births per woman. The average age of the population of Russia, which is 40.3 years old, makes it one of the oldest in the world. Low levels of immigration also contribute to Russia’s population reduction.

Russia will drop from the ninth most populated country to the seventeenth by 2050, despite the difficulty of making predictions about the country’s future. Vladimir Putin, the prime minister of Russia, has stated that he intends to increase birth rates and immigration in order to increase the country’s declining population. However, projections indicate that by the year 2050, Russia’s population will have decreased from 142 million to just 128 million.

As Moscow struggles with a population decrease that has increased since its invasion of Ukraine, the Russian government declared that it is reinstating the honorary title of “Mother Heroine” from the Soviet era for women who have 10 or more children.

According to a decree that President Vladimir Putin signed this week, the title would be given to people who “birth and raise” 10 Russian children. The 10th child turns one with a lump sum of 1 million Russian rubles ($16,645).

But there are some additional restrictions. The assessment procedure for providing the children with the “proper degree of care for health, education, physical, spiritual, and moral development” is not mentioned.

All ten children must be alive at this time unless one of them perished in a terrorist attack while doing military, official, or civic duty. The designation “Mother Heroine” was created in 1944 and used until the Soviet Union’s demise in 1991. The edict specifies that recipients will get a medal with a five-pointed star. The titles “Hero of the Russian Federation,” which is typically given for courage, and “Hero of Labor,” which is given for state service, will be identical to their ranks.

According to U.N. data, Russia’s population of working age has been dropping as a percentage of the country since 2010.

Long ago, analysts noted that the nation’s aging and the shrinking population was likely to limit growth in the ensuing decades. Early this year, the Economist Intelligence Unit predicted that by 2050, the total population of Russia would have decreased by 8.4% from its 1995 level.

These patterns might have been amplified by Russia’s unjustified assault on Ukraine since February 24.

The Moscow Times claims, citing government statistics, that between January and May, the population of Russia decreased by a record 86,000 people each month. A monthly decrease of 57,000 people in 2002 set the previous record.

Despite the casualties suffered by Russia since its invasion, data from state statistics agency Rosstat showed a decline in the number of deaths year-on-year, with the difference instead being fueled by migration and a decline in births.

The discovery was made at the same time as estimates of the number of soldiers killed in Ukraine are getting close to 50,000 and Russia reported its highest daily coronavirus infections since March of this year. Putin allegedly stated that those with large families are more patriotic.

There are also hints that birth rates may be somewhat rising. This is likely due to a mix of rising economic optimism in Russia and government incentives for expectant moms, including a $10,000 payout given to mothers of three or more children.

Since Russia was losing a million citizens annually ten years ago, population growth and demographics have long been issues for the country, and many are skeptical of Vladimir Putin’s efforts to address them. As for whether Russia is able to overcome its issues and see greater growth, otherwise, it will be prone to collapsing infrastructure with its massive land area and untapped natural resources.