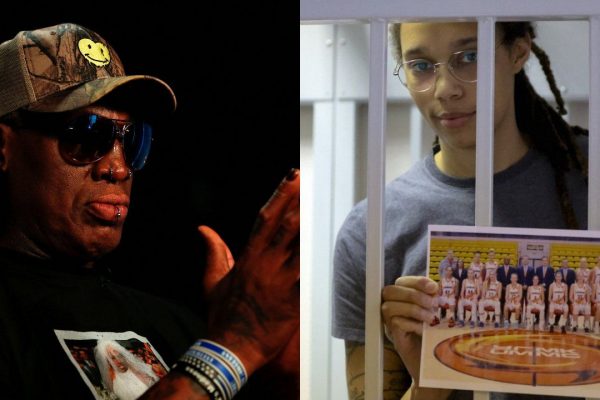 Former NBA player Dennis Rodman will not go to Russia to lobby for the release of WNBA star Brittney Griner, who is now being held in a penal colony.

The former NBA great told NBC News last Saturday that he was traveling to Russia to help rescue the player who had been arrested there.

“I obtained clearance to travel to Russia to assist the girl,” Mr. Rodman had claimed. This week if possible is when I plan on going.

On Monday, however, Mr. Rodman told ABC News that he would not be making that trip after receiving a strong warning from a US State Department official.

At a press briefing with the television network on Monday, Ned Price said, “We believe that anything other than negotiating further through the established channel is likely to complicate and hinder those release efforts.” Mr. Rodman would not be traveling as a representative of the United States government.

Mr. Rodman, who won five NBA titles while playing for the Detroit Pistons and Chicago Bulls, is no stranger to controversy on the global stage. Mr. Rodman has visited North Korea many times and met with its leader, Kim Jong-un, whom he has called a “friend for life.”

M. Rodman initially traveled to North Korea in 2014 and returned again in 2017. In 2018, he also attended the historic meeting in Singapore between his good friend Donald Trump and Mr. Kim, which culminated in the signing of a joint statement by the two leaders pledging to improve ties between their nations.

Though he may have hoped otherwise, it seems Mr. Rodman will not be playing a major role in the United States’ efforts to repatriate Ms. Griner.

The WNBA star and Olympic veteran has been in Russian prison since February, when she was arrested for possessing cannabis oil in vape cartridges while traveling through an airport outside of Moscow. This was only weeks before Russia launched its invasion of Ukraine.

In May, the State Department formally recognized Ms. Griner’s unlawful detention and began seeking to obtain her release, possibly via a prisoner swap that would return weapons dealer Viktor Bout to Russia in exchange for Ms. Griner and fellow American Paul Whelan.

This past month, Ms. Griner was convicted guilty of drug charges and sentenced to nine years in jail, despite her claim that she did not mean to breach Russian law and had left the cartridges in her suitcase by mistake.

Mr. Price added, “I mentioned last week that we had engaged in negotiations with Russian colleagues on this.” This conversation is still in progress. Since the beginning, we have been extremely open about the fact that we made a “significant proposition” for Paul Whelan’s and Brittney Griner’s freedom.

At the same time, the State Department is strongly recommending Americans not to go to Russia owing in part to the potential of unjust imprisonment, as Russia’s invasion of Ukraine enters its seventh month.

Mr. Rodman would have required a visa to enter Russia, but he would not have needed U.S. official approval to visit Moscow.