Diamonds are raining down on Uranus and Neptune. Here’s how it works: 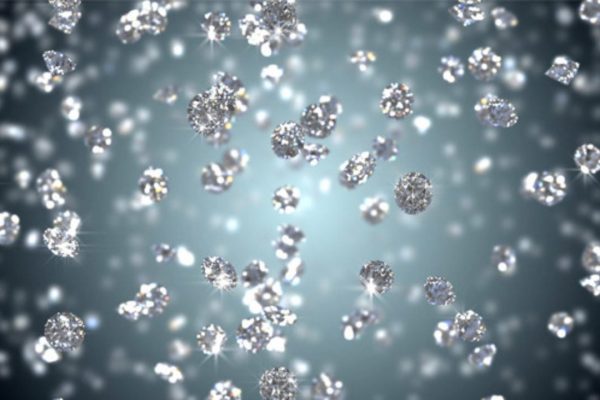 It showers diamonds deep beneath Neptune and Uranus, astronomers and physicists have speculated for over 40 years. However, studying our Solar System’s outer planets is difficult. Because just one space mission, Voyager 2, has passed past to expose some of its mysteries, diamond rain has remained a theory. Beyond the remaining mystery of the diamond rain, there is a significant loss in our failure to thoroughly investigate Uranus and Neptune. Because planets of this size are exceedingly numerous in the Milky Way, it restricts our understanding of the Solar System and the galaxy.

Although spacecraft and ground-based observatories have limited our ability to learn about the exteriors of Uranus and Neptune, breakthroughs in laboratory simulations are permitting startling new insights into what’s happening in their interiors, including what causes diamond showers. Such discoveries highlight the complexities of the chemical processes involved in the development of these planets. Our simulations provide insights into the inner workings of worlds far beyond the Solar System, including realms that we may never view directly from the outside.

Neptune and Uranus are known as our Solar System’s “ice giants” because their outer two layers are made up of compounds including hydrogen and helium. In astronomical jargon, ice refers to any light element compounds containing hydrogen, therefore the planets’ water (H2O), ammonia (NH3), and methane (CH4) make them “icy.” Both planets’ stunning bluish hues are caused by methane deposits in their atmospheres.

The “ice” in the deep intermediate layers, however, is what actually dictates their features. On Neptune, for example, an ice layer 17,500 kilometers deep rests under a 3,000-kilometer-thick hydrogen-helium atmosphere. According to simulations, gravity compresses the “ices” in this intermediate layer to extreme densities, while internal heat elevates interior temperatures to several thousand degrees Celsius. Despite the tremendous temperature, pressures one million times greater than Earth’s air pressure compress the so-called ices into a hot, dense fluid.

How Diamonds are raining down on Uranus and Neptune


The cause for the diamond rain on these worlds is astounding. Methane gas can be found on the planets Uranus and Neptune. These gases are made up of hydrogen and carbon, and their chemical formula is CH. Because of air pressure on the planet, water condenses into vapor, which then takes the shape of rain and falls on the earth.


A similar thing happens on the planets Neptune and Uranus. When methane is under pressure, the hydrogen and carbon bonds are disrupted. After then, the carbon transforms into diamond, which is why it rains here. These planets are the farthest away from Earth. The temperature here never rises over minus 200 degrees Celsius.

In these worlds, methane gas is frozen like ice, and when the wind blows, it continues to blow like clouds. The surface is perfectly flat, and the winds are supersonic, reaching speeds of 1500 mph.

Diamonds rain because the atmosphere contains condensed carbon. The most unexpected fact is that no one can grab the gems here since it is extremely cold here, making escape impossible, and reaching here even more difficult.