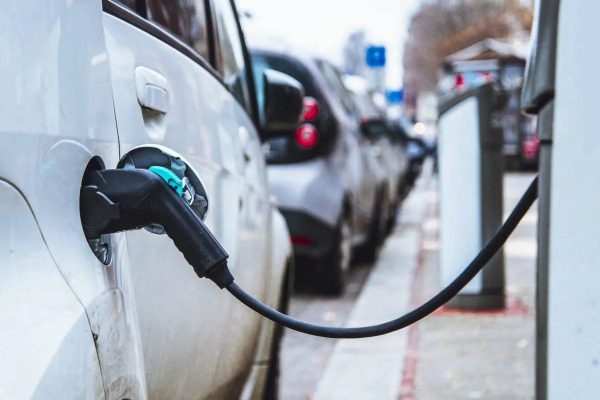 An electric vehicle (EV), often known as an electric drive vehicle is a vehicle that is propelled by one or more electric motors. Depending on the kind of vehicle, the motion may be given by wheels or propellers powered by rotary motors, or by linear motors in the case of tracked vehicles. Electric vehicles include electric automobiles, trains, trucks, Lorries, electric aircraft, boats, motorbikes and scooters, and electric spaceships.

An electric car is a type of alternative fuel vehicle that employs electric motors and motor controllers for propulsion instead of more traditional propulsion techniques such as the internal combustion engine (ICE). Electricity may be utilized to power battery-electric cars as a transportation fuel (EVs). Electric vehicles (EVs) store power in an energy storage device, such as a battery. The wheels of the vehicle are powered by electricity through an electric motor. Electric vehicles have limited energy storage capacity, which must be recharged by hooking into a power source. An electric vehicle (EV) is one that runs on electricity rather than an internal-combustion engine, which creates power by burning a mixture of fuel and gases. As a result, such a vehicle is viewed as a potential replacement for current-generation automobiles in order to solve issues such as growing pollution, global warming, decreasing natural resources, and so on. Though the concept of electric cars has been around for a long time, it has gained a lot of attention in the last decade due to growing carbon footprints and other environmental implications of fuel-based vehicles.

Electric automobiles, with zero tailpipe emissions, have the potential to drastically reduce city pollution. The amount of greenhouse gas saved by vehicles is determined by how the power is generated. Using an electric automobile in the United States would result in a 30% decrease in carbon dioxide emissions. Given existing energy mixes in other nations, such emissions are expected to fall by 40% in the United Kingdom, 19% in China, and as low as 1% in Germany.

Total EV sales in the 2019-20 fiscal year were 1,68,300 units, according to the report. According to the Federation of Automobile Dealers Associations (FADA), electric passenger car retail sales reached 17,802 units in the previous fiscal year, more than tripling from 4,984 units in FY21.

Sales of electric vehicles increased by 75% in the first quarter of this year compared to the same period last year. Subsidies to customers have been a crucial element in the uptake of electric vehicles, and they nearly quadrupled last year to over 30 billion euros ($32 billion). Manufacturers have also expanded their offering, with over 450 models now on the market, a fivefold increase since 2015. However, supply limits and rising prices pose a threat to the sector’s growth.

Certain critical materials are now produced and processed in only a few countries. China presently manufactures three-quarters of the world’s lithium-ion batteries, which are commonly used in automobiles and other electronic gadgets, and has half of the world’s refining capacity for lithium and other critical materials such as cobalt and graphite.