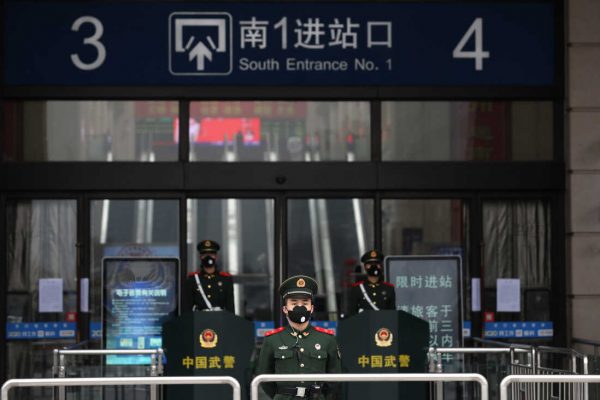 After this year’s Covid restrictions further separated the nation from the rest of the world, European firms in China are reevaluating their market strategies, according to Joerg Wuttke, head of the European Union Chamber of Commerce in China.

After a two-month shutdown in Shanghai this year, the rigorous Covid policy in China severely impacted foreign travel and commerce.

The strict safeguards taken over the last two years have helped China rebound from the shock of the epidemic more swiftly than other nations.

However, this approach stands in sharp contrast to the worldwide trend toward fewer limitations on Covids.

At a press conference for the European Chamber of Commerce’s annual China position paper, which was issued on Wednesday, Wuttke told reporters, “we speak about a full realignment of our stance on China over the previous six months.”

According to him, China has become a “locked” and “distinctively different” nation due to lockdowns and commercial uncertainties.

Wuttke claims that thus yet, just a handful of rather little businesses have departed. However, he did note that the chamber couldn’t poll companies that made the decision to skip China altogether.

According to the chamber’s position document, FDI from the European Union into China fell by 11.8 percent in 2020 compared to the previous year. Not up-to-date data was available.

While “a narrow set of high-profile international corporations poised to make billion dollar splashes,” the trend of diminishing FDI is unlikely to change as long as European executives face severe restrictions on travel to and from China to research possible greenfield ventures, the study stated.

The stated objective for economic growth in China is roughly 5.5%, so the 2.5% seen in the first half of the year is far below that. In late July, Beijing expressed concern that China might fall short of its goal.

However, there has been no indication from the government that they intend to end the so-called dynamic zero-Covid programme.

As a result, both local and foreign tourists in China now spend less time in quarantine. However, the random shut downs of tourist hotspots like Hainan and major cities like Chengdu have maintained business anxiety at a high level.

Due to the length of time required to vaccinate the country’s entire population, Wuttke believes the earliest the country might open its borders is late in 2023.

The brief summary of the chamber’s position statement warns that European companies that have stayed in China confront an increasingly hostile climate in which “ideology outweighs the economics.”

“I’ve been here on and off for 40 years and I’ve never seen anything like this,” Wuttke added, referring to the unexpected prominence of ideological over economic considerations in policymaking. I can get some of the motivation for the emphasis on self-sufficiency, which you say is “maybe accentuated by voices from the outside, America[n] sanctions, America cutting off China.”

The Chinese government has been making great strides in recent years to develop its own domestic technology and other businesses, which he was alluding to.

The United States, meanwhile, has barred US businesses from providing Huawei and other Chinese tech giants with essential components, among other steps.

In describing China’s “march away from the rest of the world,” the chamber did not elaborate on what this philosophy included, but it did say that Covid policy exemplifies it.

Wuttke claims that several in-depth, frank discussions with Chinese government officials have failed to result in a shift in policy.

The people are “torn between what they feel needs to be done, could be done,” he added. As the author continues, “then there’s a very harsh, very clear instruction from the top of, this is how it has to be, that’s the philosophy. How can you go up against ideology?”

According to a paraphrase of President Xi Jinping’s statements from earlier this month, China has “continued to react to Covid-19 and promote economic and social development in a well-coordinated fashion.” This was released by China’s Ministry of Foreign Affairs.

In spite of the fact that Xi said, “China has entered a new growth stage,” he remained firm in his belief that “China’s door of opening-up and friendly cooperation would always be open to the world,” as stated in the announcement. This was his first travel overseas since the outbreak, and he used the opportunity to meet with the presidents of numerous Central Asian nations while in Kazakhstan and Uzbekistan, where he made these comments.

Recently, China’s leader has been working to unite the country behind the Communist Party and his vision for a “great rejuvenation of the Chinese nation.” At a crucial political gathering next month, Xi will likely further strengthen his position as leader.