Expectations for the Egyptian President’s Visit to Qatar 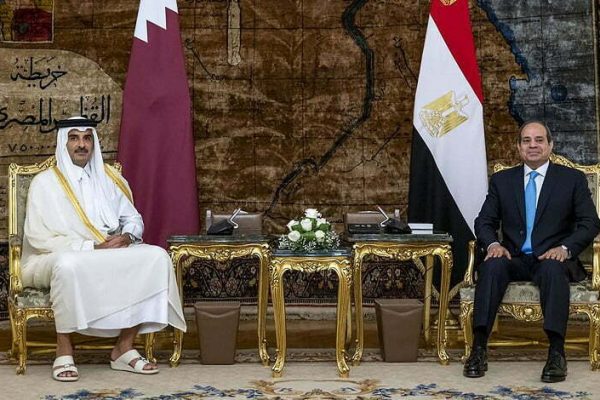 On Tuesday, the President of Egypt, Abdel Fattah el-Sisi, will make his first trip to the Gulf state of Qatar since 2017, when Egypt, together with three other Gulf governments, severed diplomatic relations with Qatar. The trip will take place in Doha.

During his two-day trip, El-Sisi is expected to meet with Qatari Emir Sheikh Tamim bin Hamad Al Thani. This comes almost three months after El-Sisi and Sheikh Tamim met in Cairo to discuss ways to improve ties between Egypt and Qatar.

Following the conclusion of a reconciliation deal in Al-Ula, Saudi Arabia, in January 2021, Egypt and Qatar were able to reestablish their diplomatic connections. In addition to Sheikh Tamim’s journey to Cairo in June, the two leaders have also met many times this year on the margins of summits.

It is anticipated that discussions on bilateral connections will take place, including the mending of a rocky relationship and the exploration of potential economic prospects.

Egypt, Saudi Arabia, the United Arab Emirates, and Bahrain suspended diplomatic, commercial, and travel links with Qatar in 2017, after accusing Qatar of meddling in their domestic affairs and sponsoring “terrorism” in the region. These allegations were made against Qatar. Doha categorically rejected these allegations and instead leveled accusations on the same governments for economically and diplomatically encircling Qatar.

Following the reestablishment of diplomatic relations between the two countries the previous year, Qatar and Egypt have participated in activities such as mutual visits and bilateral agreements. This has included adopting diplomatic efforts, which have resulted in the mutual designation of ambassadors and, for the first time since 2017, the running of direct flights between Egypt and Qatar.

Egypt and Qatar were swift to mediate a truce after Israel’s three-day bombardment that killed dozens of people in Gaza in August. This came after Israel had launched its assault.

According to the president of Egypt, the Emir of Qatar “praised Egypt’s continuous efforts on rehabilitation in the Gaza Strip” in the month of June. Both Doha and Cairo, two of the United States’ most important friends in the Middle East, have contributed to the beleaguered territory’s attempts to rebuild and have been engaged in efforts to mediate conflict between Israel and Hamas, which is in charge of Gaza’s administration.

Egypt’s food problem has worsened as a result of the Russian conflict on Ukraine, which has an influence on both the global food price and wheat export markets.

Because Egypt is one of the top importers of wheat in the world, about 80 percent of its supply came from Russia and Ukraine in the previous year. As a result of the war, Egypt has been severely impacted by the fallout of the conflict. Figures provided by the World Bank indicate that inflation in Egypt increased to almost 9 percent in the month of February, a rise that may be traced to the Russian invasion of Ukraine that took place at the end of February.

There are over 350,000 Egyptians working in Qatar, and they bring home yearly remittances totaling hundreds of millions of dollars.

During a trip to Cairo in March by the Minister of Foreign Affairs of Qatar, Sheikh Mohammed bin Abdulrahman bin Jassim Al Thani, Egypt signed investment deals with a total value of $5 billion in an effort to stimulate its flagging economy.

Qatar Energy, a global leader in the hydrocarbon industry, has made public a deal with ExxonMobil, a prominent oil and gas company in the United States, to buy a forty percent ownership in a gas exploration block located in the Mediterranean Sea off the coast of Egypt.

Observers say that the $5bn to be invested by Qatar in the coming years will contribute to Egypt’s economic development, boost job creation there, and encourage Qatari private investment in the country.