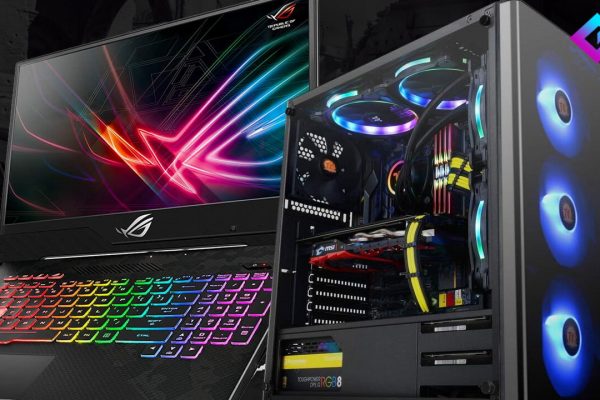 When it comes to computers, PC gamers have more choices than ever. Budget-friendly models to high-end bespoke or semi-custom variants are available in prebuilt gaming PCs. Additionally, users may create their own gaming PC from the components of their choosing and upgrade it whenever they want. While desktop computers are still common, many users increasingly choose gaming laptops.

Because they can accommodate more potent graphics cards and a larger choice of hardware,  desktops often perform better than gaming laptops. Additionally, there isn’t much room for cooling and ventilation elements in laptops. In recent years, the distance between the two possibilities has decreased. A laptop may now include more powerful hardware thanks to modern technology, and there are also more recent innovations that enhance thermal performance.

Without a question, PCs have always been the preferred choice for gamers. When comparing equivalent specifications,  desktops are less expensive than laptops. Additionally, desktops provide easy upgrades and greater compatibility.


Depending on the peripherals and components linked to them, gaming desktops may be less expensive than their corresponding laptop competitors. A high refresh rate display or the newest top-of-the-line GPU can quickly raise the cost over that of a gaming laptop. A desktop’s price can also be significantly raised by peripherals like gaming mouse, headphones, and keyboards.

Because desktops can be upgraded, they last longer. Users can progressively replace components when new technology is introduced rather than changing the entire equipment. Desktop users can also replace the malfunctioning item and keep using the system. Owners of laptops have few choices for repairs and frequently must dispose of the device if it malfunctions.

The possibility to update PCs is another factor in their appeal. The majority of desktop computers allow users to upgrade parts including RAM, CPUs, GPUs, and storage drives, however there may be certain restrictions as the technology gets older. Due to the fact that current game files are constantly expanding and requiring more resources due to their high-resolution visuals, this issue is crucial. Users may simply change the parts required to run the games without than having to replace the entire computer.

Compared to laptops, desktop gaming PCs have many more customization possibilities. Some businesses let customers design a PC to their own requirements by letting them select each component. Everything is customizable for the user, from the casing to the GPU and cooling system.
Pre-built desktops offer limited customization options. Users get to choose performance components, like GPUs, RAM, and processors, but they can’t select the case and cooling options.

Performance is also impacted by space. Because they have full-size components rather than scaled-down ones, gaming desktops frequently outperform their laptop counterparts in terms of performance. The efficiency of each component is increased due of greater cooling and ventilation, which also enhances desktop performance.

laptops offer unparalleled portability and simplicity. Everything from the monitor to the webcam and keyboard is integrated into a gaming laptop, so users don’t have to worry about buying them separately. Gaming laptops can run the latest games and are the only options for people who often travel due to their compact design.


Without question, the biggest advantage of  laptops is their portability. Users can easily fit a laptop and peripherals, like the mouse and headset, into a travel case and carry them on planes or trains.

Gaming laptops are convenient to set up and operate since they include integrated speakers, cameras, displays, and other devices. Customers don’t have to search for appropriate peripherals to set up the system because everything they require is contained in a single device. To get the maximum gaming experience out of their laptops, the majority of gamers continue to purchase aftermarket mouse and headsets.

Desktop gaming PCs are a far better choice than laptops for the majority of customers. Desktop computers cost a little less and perform better in comparison. Depending on the circumstances, they may be more durable, and users may update or replace parts as required.
However, for those who need a portable option, gaming laptops are preferable. Users can play while on the go because they are small enough to put in a bag. There is no replacement for the mobile gamer, despite the fact that they are pricey.

For those who seek the finest performance, customization, and repair choices amongst the two alternatives, desktops are the best choice. Users who regularly travel or want some degree of mobility for their daily commute to and from work should go for laptops.