If you have a fever, your Apple Watch Series 8 may notify you . 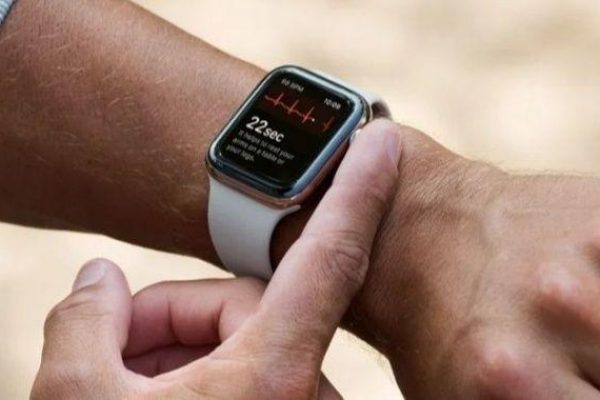 The Apple Watch Series 8 is a wearable wristwatch that allows users to do things like make phone calls, send text messages, and check email. On April 24, 2015, Apple unveiled the Apple Watch. Apple’s smartwatch family was launched in April 2015. The screen’s Force Touch detects the difference between a tap and a push, providing two modes of touch interaction with iPhones. All versions include an altimeter and Apple Music streaming, as well as a heart rate monitor and abnormal rhythm alerts. Each series comes in two case sizes and a variety of band types.

The Tactic Engine of the watch “taps” the wearer on the wrist for alerts.
If the watch was previously associated with the iPhone through Bluetooth but becomes out of range, it may transmit messages, an animated sketch, taps, and heartbeats to other Apple Watch users via the same Wi-Fi network. The gadget can also access Siri through Wi-Fi.

The Apple Watch Series 8 is set to launch in the fall of 2022. Despite the fact that Apple has not released anything about this forthcoming watch, various rumors and leaks have attempted to construct a trustworthy image of the impending Apple Watch 8. According to recent rumors, the Apple Watch 8 will include a specialized body temperature sensor that can determine whether or not the wearer has a fever.

According to Bloomberg’s Mark Gurman, the upcoming Apple Watch will have some new health-tracking functions. Previously, Gurman revealed that Apple was planning to include a body-temperature sensing sensor in its upcoming Apple Watch series, and he now believes that the technology will be included in both the normal Apple Watch Series 8 and a special tough variant geared at extreme sports athletes. Aside from these, Apple is anticipated to release a new version of the lower-end Apple Watch SE, though the body temperature sensor is unlikely to be included.

Gurman offered insight on a new sensor that may be included in the Apple Watch Series 8 to detect fever. It claims that while it will not provide a particular reading like a thermometer, it will be able to inform you if it suspects you have a fever. Not only that, but the Apple Watch will then advise you to consult a doctor or utilize a specialized thermometer to check your precise body temperature.


Other hardware modifications in the Apple Watch, if Mark Gurman’s allegations are correct, will most likely be minimal. “For the third year in a row, the Apple Watch is likely to keep the same overall processing performance—something that has never happened before.” “I recently stated that the S8 chip within the Apple Watch Series 8 will match the performance of the 2021 S7 chip, which was roughly comparable to the S6 chip from 2020,” Gurman said. It also implies that using the same basic CPU in the Apple Watch will assist to keep costs down.

It is unknown whether the capability would be available at launch, especially because regulatory permission and testing would be necessary before such functionality could be made available to the public. As a result, accuracy will be critical, especially as the Watch’s native ECG capabilities are not generally available in the places where the devices are sold.

There is also speculation of the capability being handed out to certain earlier models of the Apple Watch, though which ones are unclear for the time being, the lower-specced SE form of the wearable, which is anticipated later this year, will also likely be bypassed for the new healthcare feature.

A new robust version of the Apple Watch, which is expected to launch alongside the Series 8 later this year, is one model that will not skip it. The new model appears to be geared squarely at extreme sports aficionados, with a slew of outdoor-specific features and aesthetic aspects.


If you like Apple’s wearables, it appears like there will be more to choose from in the coming months. Apple has yet to confirm a specific date for the unveiling of the new SE, Series 8, and rugged smartphone.