In the Pacific, Tuvalu says it will “stand firm” with Taiwan 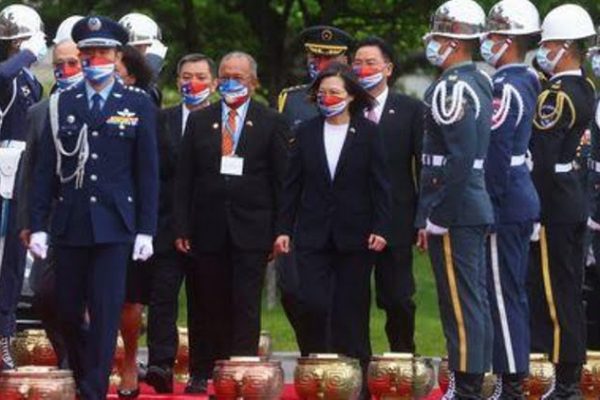 As China extends its influence in the area, the leader of the island nation of Tuvalu has pledged to “remain steadfast” in its ties with Taiwan.

Tuvalu, with a population of around 10,000, is one of 14 nations that maintain full diplomatic ties with Taiwan, a self-governed democracy that Beijing claims as its own, and one of four Pacific nations where China has intensified attempts to gain support.

At a welcoming event sponsored by President Tsai Ing-wen of Taiwan in Taipei, Tuvalu Prime Minister Kausea Natano stated that “decent and shared values” had always strengthened their relationship. Tuvalu and Taipei have maintained diplomatic ties for almost four decades.

“Through turbulent times of geostrategic objectives, we stay steadfast in our pledge to remain a steadfast and loyal friend of the Republic of China,” said Natano, using the official name for Taiwan.

“I acknowledge the pillars of our diplomatic ties, which involve two nations established on the ideals of democracy, trust, human rights, and individual liberty.”

Natano is making his first trip to Taiwan since his 2019 election.

Tsai commended their longstanding connection and thanked Tuvalu for supporting Taiwan’s international engagement and advocating for Taiwan on the international scene.

She stated, “I send my deepest thanks to Tuvalu for its priceless friendship.”

In 2019, Taiwan lost two allies in the Pacific to China: the Solomon Islands and Kiribati. Like Tuvalu, Nauru, Palau, and the Marshall Islands have remained loyal to Taipei.

Since signing a security treaty with China this year, the Solomon Islands have had a strained relationship with the United States and its allies, and have become a focal point in the rising competition between China and the United States in the strategically significant area.

The move to alter diplomatic ties has also caused alarm in the 700,000-person nation. In November of last year, Honiara was rocked by riots that highlighted local tensions and apprehension over the government’s expanding connections with China. At least three people were murdered in the turmoil, which ended when the government asked Australia, which has a long-standing security treaty with the Solomon Islands, for aid.

The United States aims to reestablish its embassy in Honiara and has pledged to increase its diplomatic and security help to the area. On September 28-29, President Joe Biden will welcome leaders of Pacific Island nations in Washington, D.C.