Iran Starts Executing People in Public, Which Angers a Public That Was Already Protesting 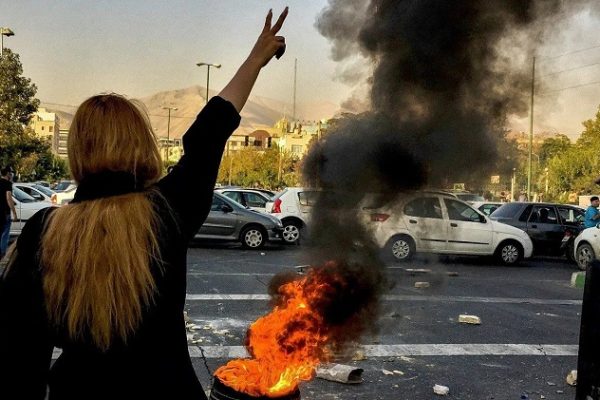 Another protester, this one 23 years old, was executed by hanging from a construction crane in the early hours of the morning in the city of Mashhad, sparking fresh waves of unrest.

Iran Officials have begun publicly executing protesters, including a 23-year-old man who was hanged from a construction crane on Monday, bringing a new wave of outrage from an Iranian public calling for the end of the country’s theocratic regime after months of protests that have only escalated as the government’s crackdown has turned deadlier.

The public and human rights groups have voiced their strong disapproval of the executions, the first of which took place on Thursday at a prison near Tehran and the second on Monday in the northeastern city of Mashhad, and some prominent members of Iran’s clerical establishment have even questioned the religious legitimacy of the death sentences.

In a violent reaction that has included mass arrests and beatings, military assaults, and the deaths of scores of teens and children, Iran’s security services have murdered hundreds of Iranians since the demonstrations started in September. At least 450 demonstrators, according to human rights organizations, have been killed, while the UN estimates that 14,000.

The public executions are now largely seen as the government’s last-ditch attempt to quell an insurrection that has become the most widespread and significant since the 1979 revolution that put the mullahs in power. A general strike movement throughout the nation has gained steam, adding to the danger to a dictatorship whose economic footing is already precarious as a result of mass demonstrations occurring in dozens of cities several times a week.

Majid Reza Rahnavard, 23, was publicly executed in Mashhad on Monday, just after the morning call to prayer. Images released by the government media showed bystanders gathering around the crane where his corpse hung, their eyes fixed on the bag covering his head. In less than a month, he went from being arrested on suspicion of murdering two unmasked Basij fighters to being put to death. He was employed at a fruit stand.

The 23-year-old coffee shop worker Mohsen Shekari was murdered four days before at a jail 20 miles outside of Tehran for allegedly blocking the road and stabbing a member of the Basij militia during demonstrations in Tehran.
Human rights organizations have claimed that the two men’s trials were conducted by “lynching committees” and without any kind of judicial due process. Advocates claim that the men were tried in secret, with government-assigned attorneys who provided inadequate representation, and without any members of their families present. Additionally, they claim that prosecutors used confessions obtained via coercion while the victims were in jail.

A large outcry has been triggered by the public hangings, and this might make the situation in Iran much worse. The communities where both men lived responded to their killings with large-scale, instantaneous demonstrations in the streets. Those who are seated, you will be next” and “with each person slain a thousand will rise up” were among the chants heard in footage shared on social media showing the protesters as they marched.

On Monday, students at a number of universities around the country held vigils for Mr. Shekari and Mr. Rahnavard by placing their images on memorial walls with rose petals and candles. In one film, a placard with crimson handprints and the words “the blood of our nation’s young” was seen.

“There is absolutely no fear among us. Mona, a graphic designer in Tehran who is 39 years old, stated in a phone conversation, “We are all more indignant and resolved.” If we don’t stand up to them now, our children will be the next ones to die. Can’t they do anything else?

According to Amnesty International, the death penalty has been handed out to at least 11 additional demonstrators, most of whom were men in their early 20s.

Additionally, three other individuals have been convicted on crimes that carry the death penalty but have not yet been sentenced, and six other men are awaiting trial for possible capital offenses.

Human rights lawyer and Amnesty International Iran researcher Raha Bahreini stated, “These trials and executions are aimed to stifle the demonstrations and create an environment of fear and intimidation in the population.” The Iranian government has shown its resolve to carry out its campaign of mass executions both in public and behind prisons.

Since the protests began in September, when the murder of 22-year-old Mahsa Amini while in the custody of the country’s morality police sparked the uprising, women and young people have been in the forefront of the campaign. The identity of the clerical rule has been associated with the country’s harsh dress restrictions on women, which are enforced by that police force.

This month, Iranian officials signaled their increasing desperation by announcing the disbanding of the country’s morality police, a move widely mocked by protestors and human rights organizations as propaganda that would do nothing to appease demonstrators. However, the security forces have not been restrained in their use of arrests and brutality to quell demonstrations, and the killings are further adding to the belief that the government would do whatever it takes to put down the uprisings.

It has been reported by several Iranians that there is a rising environment of terror. Tehran resident Mina, 26, claimed her parents had begged her not to attend nighttime protests in the area following the first killing. She said she still hadn’t made up her mind, but said she and her friends had been horrified by images showing Mr. Shekari’s mother sobbing and calling out her son’s name after hearing the news of his death.

Two of the young men awaiting death have gone viral in a video featuring their grandparents. Grandmothers may be seen in the recordings pleading with the courts to release their grandsons on death row, claiming that their male offspring are innocent and deserving of second chances.

The father of another protester, 20-year-old karate champion Mehdi Karami, told the daily Etemad on Monday that the government-assigned lawyer for his son’s case won’t return phone calls and the family doesn’t know where he works.

Etemad said that Mashallah Karami, the father, told his son’s friend that he was afraid to sleep every night for fear that he would hear that his son had been executed. Mr. Karami said he was a street vendor who peddled tissues and napkins and had a crippled kid. “Please, for the love of God, don’t kill my kid! Put him away for the rest of his natural life.

Some members of the country’s religious establishment have reportedly been shaken by the killings. Qom’s leading clerics and intellectuals have published a statement denouncing the killings, saying that there is no evidence to support the claims that the two men who were hanged were “moharebe,” or enemies of God. The religious leaders voiced their disapproval of the speed with which the trials were proceeding, arguing that the accusations and penalty were disproportionate to the crimes committed. They also urged the court to put a stop to any more executions.

On Monday, Gholam-Hossein Mohseni-Eje’i, the head of the clerical judiciary, claimed that judges have the right to define who is an enemy of God. According to reports from Saturday in the Iranian press, Majid Mirahmadi, the country’s deputy interior minister, said that the media and worldwide anger over the execution of protestors will have no impact on the choices of court authorities.

The population and the Iranian diaspora are very worried about the killings. Mohamadreza Ghanbartalab, a member of Iran’s Basij plainclothes militia who was sentenced to death for assault, has become a cause celebre in the Iranian media. Iranian media have stated that after Mr. Ghanbartalab testified against the suspected attacker, he afterwards dropped his legal lawsuit and extended forgiveness to the defendant, Mahan Sadrat.

Mr. Ghanbartalab has frequently begged for the life of Mr. Sadrat, 20, in a social media account verified as genuine by official media. I implore you not to put Mahan to death, as one commenter said. The execution of Mr. Sadrat was supposed to take place on Sunday, but it was reportedly postponed until hours before the appointed time.

Dr. Hamid Ghare Hassanlou, a prominent radiologist and charity worker who has constructed multiple schools in rural Iran, has received widespread support from the medical community, both within and outside of Iran, in an effort to halt his execution. Similarly, Dr. Ghare Hassanlou was accused of being an atheist.

When Dr. Ghare Hassanlou and his wife, Farzaneh, were driving home from work earlier this month and encountered heavy traffic due to a protest, they got out of their car to walk and witnessed a confrontation between protesters and a member of the Basij militia, who was later pronounced dead at the scene. The security forces detained them the next day, accusing them of involvement in the killing; Dr. Ghare Hassanlou was given the death penalty, while Ms. Ghare Hassanlou was given 25 years in jail with no visitor or contact privileges.

Those who work in the medical field are held in the highest regard in Iranian culture. Dr. Nouradin Pirmoazen, a former congressman from the reformist movement currently in exile in California, claims that the regime wants to murder an innocent physician to convey a message that nobody is exempt and to deter professionals from revolting.