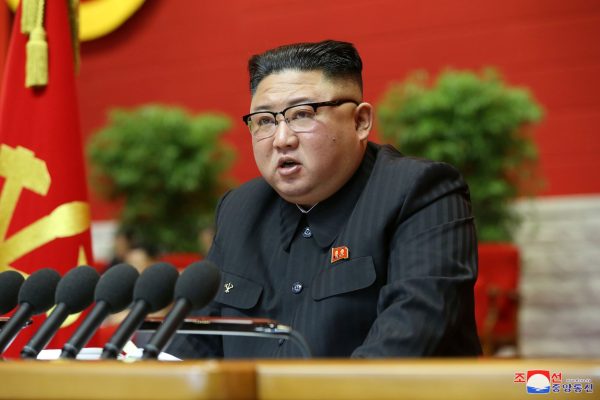 Friday, official media reported that North Korean leader Kim Jong Un emphasised that his nation would never surrender the nuclear weapons it needs to oppose the United States, which he accused of attempting to undermine the North’s defences and ultimately topple his regime.

Kim made the remarks during a Thursday address to North Korea’s rubber-stamp parliament, when members enacted laws controlling the use of nuclear weapons. Kim hailed the legislation as a move to consolidate the country’s nuclear status and make it clear that such weapons would not be negotiated.

The legislation outlines the circumstances under which North Korea may be tempted to use its nuclear weapons, such as when it decides that its leadership faces an immediate “nuclear or non-nuclear assault by enemy forces.” If Pyongyang’s leadership is attacked, the legislation mandates that North Korea’s military “immediately” undertake nuclear attacks against enemy troops, including their “beginning point of provocation and command.”

The legislation also states that North Korea may deploy nuclear weapons to avoid an unnamed “catastrophic calamity” to its government and people, a vague phrase that, according to analysts, reflects an escalating nuclear doctrine that might increase the level of anxiety among its neighbours.

Kim has made more inflammatory threats of nuclear battle against the United States and its allies in Asia, and he has also warned that the North would use its nuclear weapons preemptively if threatened. As he pushes the growth of his nuclear weapons and missiles programme, his most recent remarks highlighted the region’s escalating hostility.

In a speech published by the North’s official Korean Central News Agency, Kim stated, “The United States’ goal is not only to eliminate our nuclear capability, but also to eventually force us to give up or weaken our right to self-defense by giving up our nuclear weapons, so that they can at any time bring down our government.”

Kim said, “Let them punish us for 100 days, 1,000 days, 10 years, or 100 years.” We will never give up our right to self-defense, which ensures the survival of our nation and the protection of our people, in order to momentarily alleviate the problems we are now suffering.

North Korea will begin its long-delayed deployment of COVID-19 vaccinations in November, according to Kim, who also addressed domestic concerns. He did not define how many dosages, where they would come from, or how they would be supplied to his 26 million-person population.

The non-profit organisation GAVI, which operates the United Nations-backed COVAX distribution programme, said in June that it believed North Korea had accepted China’s offer of vaccinations. GAVI said at the time that the offer’s terms were unknown.

North Korea has spurned U.S. and South Korean offers of vaccinations and other COVID-19 help as well as prior COVAX offers, presumably due to international monitoring restrictions.

Kim claimed victory against COVID-19 last month and ordered the easing of preventative measures barely three months after his administration first recognised an outbreak. Experts think North Korea’s announcements about its outbreak are managed in order for Kim to keep full power.

The North Korean claim on Kim’s address comes a day after South Korea proposed a meeting with North Korea to restore temporary reunions of aged relatives separated by the 1950-53 Korean War, which were last held in 2018.

Given the severe deterioration of inter-Korean relations and the impasse in bigger nuclear discussions between Washington and Pyongyang, it is very improbable that North Korea would accept the South’s offer, say experts. In 2019, U.S.-North Korean negotiations failed because to disputes about the relaxation of crushing sanctions against the North in exchange for North Korean disarmament measures.

Kim’s address on Thursday was hostile toward South Korea, and he pushed his nation to extend the operational functions of its tactical nuclear weapons and hasten their deployment in order to reinforce the nation’s deterrence against conflict. These remarks appeared to be in line with a ruling party decision in June to approve unspecified new operational duties for front-line troops, which analysts say are likely to include plans to deploy nuclear weapons on the battlefield against South Korea along the tense border between the two countries.

Cheong Seong Chang, a senior analyst at the Sejong Institute in South Korea, interpreted Kim’s remarks and the new North Korean law as a warning that Pyongyang would launch immediate nuclear strikes against the United States and South Korea if they ever attempted to decapitate Pyongyang’s leadership.

Cheong said that the North is transmitting a warning that it may use its nuclear weapons during confrontations with South Korea’s conventional forces, which would increase the possibility of accidental encounters growing into a nuclear catastrophe.

Since 2019, North Korea has accelerated the development of short-range, nuclear-armed missiles capable of striking South Korea. According to experts, North Korea’s rhetoric on these missiles implies a threat to aggressively use them in combat against the more powerful conventional forces of South Korea and the United States. The United States has around 28,500 soldiers stationed in the South to prevent attack from the North.

The U.S.-led diplomatic effort to defuse the nuclear standoff has been further complicated by an intensifying U.S.-China rivalry and Russia’s war on Ukraine, which has widened the rift in the U.N. Security Council, where Beijing and Moscow have blocked U.S. efforts to tighten sanctions on Pyongyang for its renewed long-range missile tests this year.

In 2020, Kim conducted a record number of weapons tests, firing over 30 ballistic weapons, including his first intercontinental ballistic missile displays since 2017.

Kim may soon order the North’s first nuclear test in five years, according to U.S. and South Korean officials, as part of his strategy to force Washington to recognise the North as a nuclear state and negotiate concessions from a position of strength.

According to experts, Kim is also attempting to increase his power by bolstering his collaboration with China and Russia in a new alliance aimed at undermining U.S. dominance.

North Korea has consistently blamed the United States for the Ukraine conflict, citing the West’s “hegemonic policy” as justification for Russia’s defensive military measures in Ukraine. U.S. authorities reported this week that the Russians are in the midst of obtaining artillery rounds and missiles from North Korea to alleviate their supply constraints in the battle against Ukraine.

North Korea has also recognised the independence of two pro-Russian breakaway enclaves in eastern Ukraine, joining Russia and Syria as the only governments to do so, and has proposed sending its construction workers there to assist in the reconstruction process.