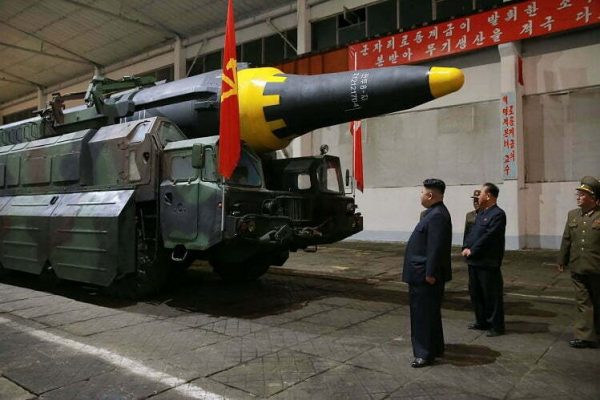 Kim Jong-un, the leader of North Korea, has said that his country is prepared to activate its nuclear war deterrent.

Speaking at a commemoration of the Korean War, Mr. Kim also said that the nation was “totally prepared for any military conflict” with the US, according to official news agency KCNA.

The remarks come amid worries that North Korea may be getting ready for its seventh nuclear test.

The US issued a warning about Pyongyang’s potential for such a test last month.

2017 saw North Korea conduct its most recent nuclear test. On the Korean peninsula, however, tensions have been increasing.

Sung Kim, the US’s special envoy to North Korea, claims that the country has tested 31 missiles this year, more than double the previous record-breaking year’s total of 25.

In retaliation, South Korea fired eight of its own missiles in June.

North Korea declares victory over the US in the 1950–1953 Korean War, despite the fact that it ended in a ceasefire. Military parades, pyrotechnics, and dancing highlight the yearly “Victory Day” festivities.

In his address to commemorate the occasion, Mr. Kim said that North Korea must complete the “urgent historical duty” of strengthening its self-defense due to nuclear threats from the US.

He noted that the US has mischaracterized North Korea’s routine military drills as provocations.

Mr. Kim also seemed to respond to rumors that South Korea is reviving a strategy to tackle the nuclear threat from North Korea by undertaking preventative attacks in the case of an impending assault.

Pre-emptive attacks on Pyongyang’s missiles and perhaps its top leadership are recommended under the so-called “Kill Chain” policy, which was initially developed a decade ago.

It comes with its own dangers and may spark an arms race, according to some experts.

Is conflict “on the horizon” for North Korea?

It’s really unsettling to hear Kim Jong-Un warn that the Korean peninsula is “on the verge of war.” However, North Korean rhetoric may be rather abrasive, particularly around important anniversaries.

It shows how enraged the North Korean leadership is with Yoon Suk-yeol, the country’s new president.

President Yoon has outlined a new, more robust defense strategy since taking office in May. If Seoul feels Pyongyang is about to launch a nuclear assault on it, it would enable South Korean troops to strike the North before Pyongyang could.

With the use of this so-called “Kill Chain” approach, South Korea would be able to attack North Korean targets beforehand with ballistic missiles and airstrikes, including destroying their command and control centers. Attempting to murder Kim Jong-Un directly, in other terms.

Pyongyang is also dissatisfied with Washington’s lack of involvement since since President Biden took over for Donald Trump.

All of these could indicate that the North is planning an intentional escalation of the situation.

In the near future, everyone anticipates that Pyongyang will conduct its seventh underground nuclear test. The Punggye-ri test site has been getting ready since March.