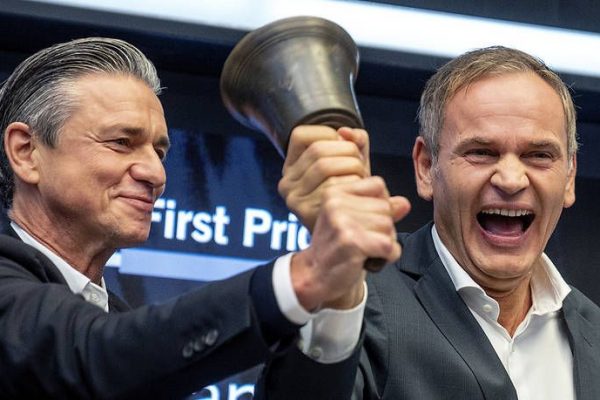 The Porsche stock price increased on its first day of trading on Thursday, marking one of the most successful initial public offerings in the history of Europe.

After reaching the highest point of their range late Wednesday, when they were valued at 82.50 euros, shares of the renowned sports car manufacturer started trading on Thursday morning at 84 euros, which is equivalent to $81 in American currency. It places a value of around 75 billion euros on the corporation.

The price of a share has stabilized at 84.50 euros as of 9:30 a.m. London time on Thursday. The sale of 911 million shares is a nod to Porsche’s iconic 911 vehicle and is being made by Porsche’s parent company, Volkswagen.

Arno Antlitz, the chief financial officer of Volkswagen, was a guest on CNBC’s “Squawk Box Europe” on Thursday and said that “today is a wonderful day for Porsche and a great day for Volkswagen.”

According to Antlitz, the organization had “solid financials” and “a very persuasive vision for the future” when it conducted the initial public offering (IPO), therefore it was certain that it would be successful.

“Despite the difficult circumstances, we were certain that our initial public offering would prove to be successful, and we were correct,” he said.

Positive responses were seen prior to the commencement of trade, with cornerstone investors having already claimed almost 40 percent of the shares that were available, as reported by Reuters. Volkswagen has been the only owner of Porsche AG up until this point; however, the company is now selling off a portion of its ownership in the sports car manufacturer and listing 12.5% of its shares.

Volkswagen believes that the listing of Porsche’s shares would result in a financial boost for the firm equal to 19.5 billion euros, providing the business with more financial flexibility in relation to the production of electric cars.

The historic listing takes place at a period of turbulent market conditions. The auto sector is still reeling from the repercussions of the conflict in Ukraine, and the values of major luxury carmakers such as Aston Martin, Ferrari, BMW, and Mercedes-Benz have all decreased in recent months.

According to the comments of one investor who spoke with Reuters, “The Porsche AG has entirely isolated itself from the bad market trends.” It is believed that companies are postponing going public due of the situation of the market now.

Porsche is still a very powerful brand that has a distinctive place in the market, so the initial public offering is not likely to serve as a model for other businesses to follow in its footsteps. On September 5, Volkswagen made the original announcement that it intended for Porsche to go public.

Additionally, Antlitz discussed the continued semiconductor shortages, which will be a concern throughout the course of this year.