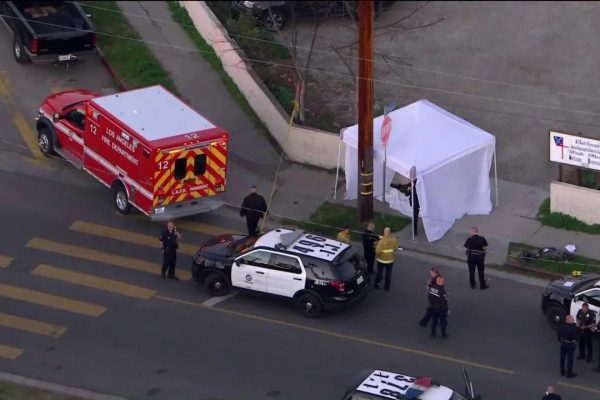 On Monday, a gunman perched on a rooftop opened fire on families waving flags and children riding bikes at a Fourth of July parade in the Chicago suburb of Highland Park, killing six and injuring more than 36.

According to police, the gunman used a ladder in an alley to climb to the roof of a business. The attack turned a civic show of patriotism into a bloodbath.

After 22-year-old Robert E. Crimo III surrendered to authorities, police announced that they had a suspect in custody.

Highland Park’s main street became a crime scene spanning blocks, strewn with abandoned chairs and flags. Witnesses who later returned to retrieve strollers and other items were told they couldn’t go any further than the police tape.

“It sounded like fireworks going off,” retired doctor Richard Kaufman, who was standing across the street from the gunman, said, adding that he heard about 200 shots.

“It was complete chaos,” he said. “People were tripping over each other, covered in blood.”

Many Americans are still thinking about gun violence as a result of the shooting. Two Philadelphia police officers were shot near the Benjamin Franklin Parkway just hours after the Highland Park shooting, as thousands of people celebrated the Fourth of July with a concert and fireworks display. Both officers were eventually released from the hospital.

The attack in a Chicago suburb is likely to reignite the debate over gun control and whether stricter measures can prevent the mass shootings that occur all too frequently in the United States.

The motive for the shooting in Highland Park was unknown, according to police. The injured ranged in age from 8 to 85, with four or five children among them.

Nicolas Toledo, a man in his 70s, was the first victim identified by his family as of late Monday.

“What was supposed to be a fun family day turned into a horrific nightmare for us all,” his granddaughter, Xochil Toledo, said in a statement released by the family on social media.

“We are broken and numb as a family,” she added.

Jacki Sundheim, a Highland Park synagogue teacher, was another victim. In an email to members, the North Shore Congregation Israel confirmed her death.

“There are no words to express how deeply we mourn Jacki’s death and our condolences to her family and loved ones,” the synagogue said.