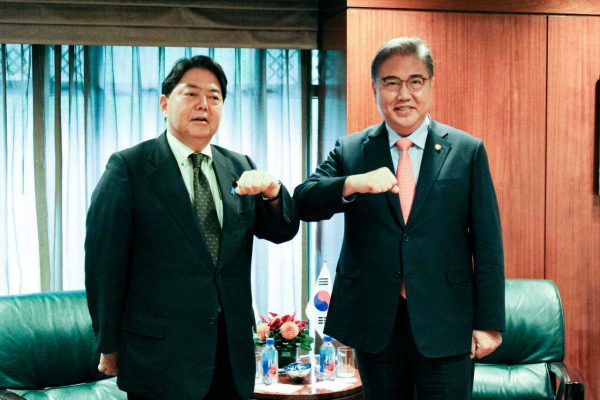 During a bilateral meeting in New York, the foreign ministers of South Korea and Japan came to an agreement to work together to settle historic disagreements, according to a statement released by Seoul’s Foreign Ministry on Tuesday.

On Monday in New York, the Japanese Foreign Minister Yoshimasa Hayashi and the South Korean Foreign Minister Park Jin met for bilateral discussions on the margins of the United Nations General Assembly.

In view of the rapidly shifting geopolitical landscape, the two ministers came to the conclusion during their meeting, which lasted for about half an hour, that they should maintain and further improve their bilateral and trilateral collaboration with the United States.

The two ministers also promised to make genuine attempts to come to a settlement to the historic disagreements that have strained relations between Seoul and Tokyo over the course of many years in the past. These disputes include Japan’s forced labour issue.

“We had a nice chat. We reached an agreement that earnest efforts would be made by both parties in order to strengthen the relations between Korea and Japan “After his discussion with Hayashi, Park shared his thoughts with media in New York.

According to a Korean ministry official who asked to remain anonymous, the two of them got together in a setting that was described as “friendly.”

The last time that these two individuals spoke face to face was in August, at the 55th conference of the foreign ministers of the Association of Southeast Asian Nations, which took place in Phnom Penh, Cambodia.

The subject of forced labour, which continues to be the primary source of contention in conversations about mending relations, was another topic that was discussed between the two ministers.

In 2018, the Supreme Court of Seoul issued its decision on a case in which Korean victims sought compensation by requesting that the assets of two Japanese companies be liquidated and distributed to them.

The court has ordered the firms, Mitsubishi Heavy Industries and Nippon Steel, to pay reparations for coercing Koreans into work during Japan’s rule of Korea from 1910 through 1945. This occupation lasted for a total of 45 years.

However, they refused to accept responsibility and reiterated the stance of their government, which is that any and all issues relating to their annexation of Korea were resolved once and for all by an agreement that was signed in 1965.

As the highest court in Seoul has not yet delivered its final ruling on the asset liquidation, the administration of Yoon Suk-yeol has been working to find a way to resolve the issue without having to liquidate the assets. This is because the administration believes that doing so would likely cause bilateral relations with Japan to plunge to their worst level.

According to the reports, Park discussed a few different options for how to handle the court’s verdict, one of which was having a third party absorb the liabilities of the Japanese company. A new debt contract may be negotiated between the creditors, who in this instance are the victims of Korean crime, and a third party, such as a charitable charity. Donations may be gathered from businesses and individuals in both countries, and these contributions will be put toward a fund to compensate the victims of the incident.

In addition to the monetary compensation, the organisation representing the victims has asked an authentic apologies from the firms. The Korean government has the challenging challenge of negotiating with the Japanese government in order to elicit a response that would fulfil the requirements set out by the victims.

Since Park took office in May, the two ministers will be meeting for the fourth time to discuss the matter on Monday. They first got together in person for the first time in July, at the G-20 Foreign Ministers Meeting that was taking place in Bali, Indonesia. Later on in the same month, Park made the trip to Tokyo to attend the second round of bilateral negotiations with Hayashi. The next round of meetings took place in Cambodia.