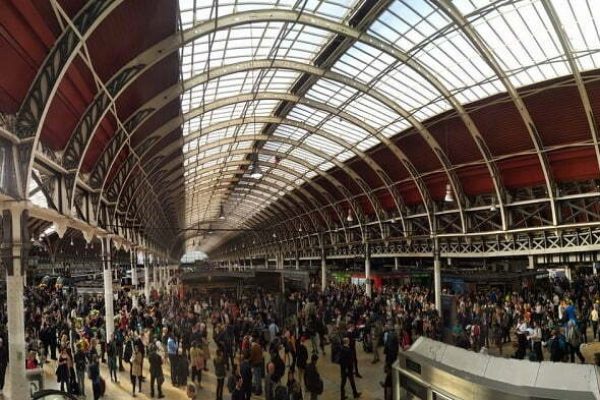 In spite of the fact that it is one of the 10 busiest train stations in Britain, London Paddington remained nearly entirely closed for the morning rush hour on Tuesday.

The station, which is the terminus for trains to the West of England and South Wales, was out of operation for the majority of Monday due to damage to an overhead wire. This caused tens of thousands of people to have their travel plans disrupted, and they were unable to make it to the capital in time for the state funeral of the Queen.

According to GWR, which is responsible for operating the majority of the trains that enter and exit the station, there would be no service “until at least 9.30 in the morning.” There have been rumours going around the station that the issues might last until noon, with knock-on delays occurring throughout the remainder of the day.

The passengers are being instructed to only travel if it is absolutely essential.

It is a “major dewirement” 10 miles to the west in Hayes & Harlington, as a regular flow of commuters emerging from the Underground and from cabs at Paddington learn when they read the signs, which are posted across the area.

The incident took place early on Monday morning when a string of six passenger trains got entangled with up to two miles of fallen overhead wires. The event caused significant delays on the affected lines.
After the passengers were removed from the trains in a safe manner, the line that serves Heathrow airport as well as the four tracks that link the capital with most of the western region of the nation were blocked as a result of the incident.

An apology has been issued by Network Rail, the company that controls the infrastructure, “for the severe inconvenience caused on this day of national sorrow.”

Between London Paddington and Ealing Broadway, which is located five miles to the west, there is a train that departs every half hour. The overwhelming majority of passengers who are planning to go farther west are being instructed to make a transfer at Reading utilising commuter services to and from London Waterloo. These trains run in both directions. The alternate route takes much longer since it relies on commuter trains, which regularly stop at stations.

Chiltern trains, which serve London Marylebone, are also an option for customers travelling to and from Oxford. It is recommended that guests travelling by airline use the Tube, even though this will take them at least an hour to get to their destination from Paddington, whereas the fast train will get them there in only 15 minutes.

Anyone who travels to Heathrow will see that operations are becoming better. On Monday, there were a total of 200 flight cancellations due to the need to minimise noise levels above the city of London in preparation for the burial of the Queen. Additionally, numerous aircraft were delayed due to limitations placed over Windsor.

Because of the disturbance, aircraft departing from Heathrow were running a good deal later than they typically do. The last flight on British Airways, which was bound for Glasgow, finally took off shortly before midnight, about two hours after schedule.

The final aircraft to land was a British Airways flight from Tirana that landed just after 12.30 o’clock in the morning.