The Hong Kong Markets Regulator, Ashley Alder, is set to take on the role in U.K 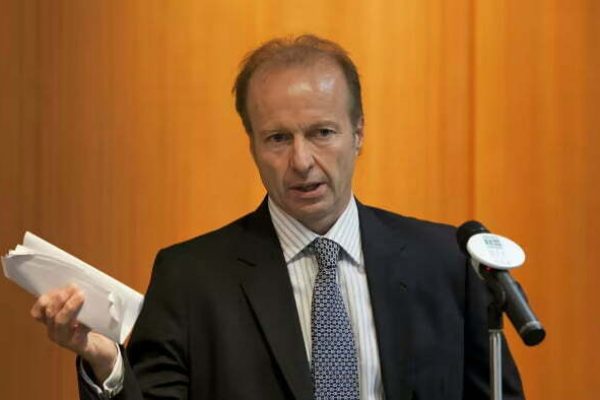 Ashley Alder, one of Hong Kong’s top financial authorities, is stepping down from his position as the city’s markets regulator’s chief executive to take the helm of the U.K. Financial Conduct Authority.

Under Mr. Alder, who has served as CEO since October 2011, the Securities and Futures Commission, an independent organization formed in 1989 to oversee Hong Kong’s securities and futures markets, has earned a reputation for being a much more aggressive gatekeeper.

The 63-year-old British national will begin his new position in January. He was originally scheduled to hold the position until September 2023. According to Tim Lui, the agency’s chairman, he contributed to the SFC becoming “a determined, effective and independent market regulator widely acknowledged by its local and international counterparts.”

The Hong Kong government said that a search for a new CEO will shortly begin on a worldwide scale. Mr. Alder will follow Richard Lloyd, the FCA’s temporary head who has been in the U.K. since May. The FCA controls the behavior of over 51,000 enterprises and supervises the financial services sector and markets.

International executives with strong connections hold some of Hong Kong’s top financial roles, which supports the city’s standing as a major financial hub. One of them is Nicolas Aguzin, a seasoned banker from Argentina who took the CEO position at Hong Kong Exchanges & Clearing Ltd. last year.

Mr. Alder’s departure occurs as the city struggles under severe pandemic regulations that have caused a flight of foreign nationals and financial professionals. The SFC informed Hong Kong legislators earlier this year that it was dealing with a competitive labor market that was made worse by emigration from the city and a constrained capacity to bring in talent from elsewhere.

The SFC’s first significant action under Mr. Alder was the adoption of stricter regulations for Hong Kong IPOs. As worldwide oversight and punishments rose during the 2008 financial crisis, the regulator has recently boosted the penalty it imposes on financial firms for misbehavior. Banks like UBS Group AG, Bank of America Corp., Morgan Stanley, and Citigroup Inc. are just a few of the names it has fined and punished.

When Chinese businesses, notably IT behemoths, sought to go public and the city struggled to compete with the United States for listing opportunities, the former lawyer also served as the regulator’s leader.

Dual-class shares, which offer one class of investors greater rights than another, were first rejected by the SFC, but it eventually changed its mind. In 2018, Hong Kong approved the IPO of internet firms with weighted voting rights, clearing the path for firms like Xiaomi Corp., Meituan, and Alibaba Group Holding Ltd.

In addition, Mr. Alder has promoted the growth of climate financing. A strategy to boost transparency and reduce “greenwashing” in sustainable finance was agreed earlier this year by the International Organization of Securities Commissions, which Mr. Alder has led since 2016. In recent years, the SFC has collaborated with the Hong Kong Monetary Authority, the city’s de facto central bank, to develop the industry.

Originally intending to retire in 2020, Mr. Alder decided to remain on for an additional three years amid the Covid-19 outbreak when the market was under pressure.

Mr. Alder expressed his appreciation for the chance to work for the FCA in a statement released by the UK Treasury, saying that it “helps map the UK’s post-Brexit future as a global financial center that continues to foster innovation and competition.”