The Worldwide Use of Nuclear Power Continues to Rise 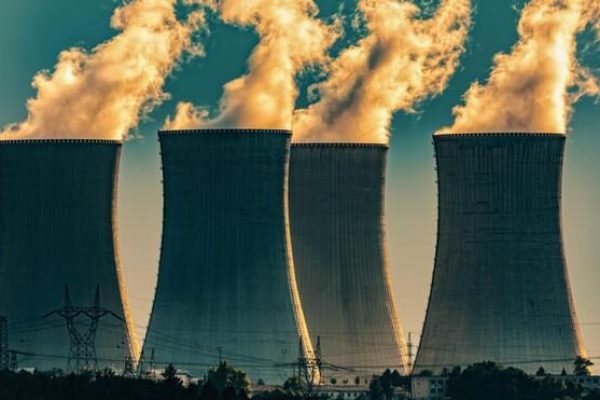 As efforts to mitigate climate change become more intense, there is a growing realization that using nuclear energy as part of the answer would make the route to net-zero carbon emissions quicker and simpler. At this point, 91% of global greenhouse gas (GHG) emissions and 95% of world GDP are covered by commitments to achieve net-zero emissions. Policies favorable to the nuclear industry are being enacted by governments all over the world. Plans to construct massive nuclear power plants based on the designs of already-existing reactors are gaining traction as a result. Dozens of cutting-edge designs are now being developed with financing from both the public and commercial sectors.

The world’s nuclear capacity will treble during the next decade, but its percentage of total power will decrease. According to the IHS Markit Planning Case, between 2022 and 2050, there will be an addition of 355 GW of new nuclear capacity. This is almost 2.5 times the pace of the previous three decades. However, retirements in North America and Europe will counterbalance a significant portion of the new construction. As a direct consequence of this, the total installed capacity throughout the globe will increase relatively marginally, going from 415 GW (gross) in 2022 to 555 GW in 2050. The percentage of worldwide power production contributed by nuclear energy would decrease, from 10% to 7% during the same time, as a result of the rising demand for electricity and the rapid advancement of renewable energy technology. 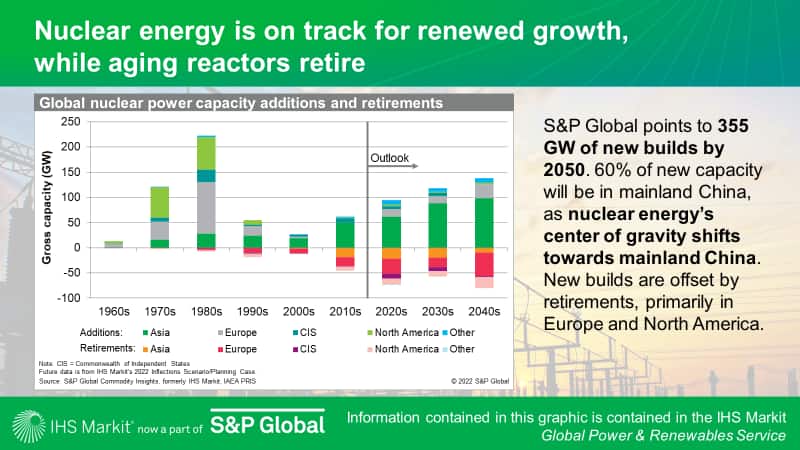 The United States now has the world’s biggest nuclear fleet, with 100 gigawatts (GW), followed by France with 64 GW. According to our research, over sixty percent of all new construction worldwide will take place in mainland China over the next several decades. Within the next five years, mainland China’s total will pass that of France, and within the next ten years, it will pass that of the United States. Contributions to the new construction will be made by countries like as the United Arab Emirates, Turkey, Bangladesh, and Egypt, who are all in the process of constructing their own nuclear power facilities. A growing number of nations are making preparations to become members of the nuclear energy club.

Outside of mainland China, there has been a reduction in the number of nuclear power plants that have been newly constructed during the last three decades, which has put a financial strain on the construction industry. Over the course of the last ten years, Russia has emerged as the world’s leading supplier of new nuclear power reactors. Because to its invasion of Ukraine and the subsequent repercussions, Russia’s leadership position has been called into doubt. On the other hand, mainland China, France, South Korea, and the United States now have prospects to increase their exports.

There are dozens of SMRs and advanced designs that are now being developed at different levels, funded by financing from both the public and commercial sectors. Before the year 2035, there is a strong chance that demonstration and first commercial units of several innovative designs will be constructed. In a manner comparable to those of wind and solar photovoltaic (PV), consistent government policies and backing from a number of different nations are required in order to guarantee volume, permit the construction of supply chains, and bring down prices. If improved designs are ever to produce substantial volumes, it won’t be until at least the year 2040 at the earliest. The IHS Markit Planning Case presently only accounts for minor enhancements resulting from the introduction of new designs by 2050.

The newest designs for reactors come in a variety of sizes, each operating at a different temperature. Designs that operate at high temperatures have the ability to produce hydrogen directly and might also be used to replace fossil fuels in a number of difficult to de-carbonize industrial sectors. In power systems that are not suited for big reactors, such as those found at industrial sites and in distant places, smaller-sized reactors might be employed instead.

Long-standing problems with costs and delivery schedules must be resolved before new nuclear construction projects of any size can begin. In addition, sophisticated designs are confronted with significant challenges that are unique to them. Progress in permanent disposal of high-level waste has been slow. Finland is within a few years of opening a deep geological repository for operation, the world’s first.