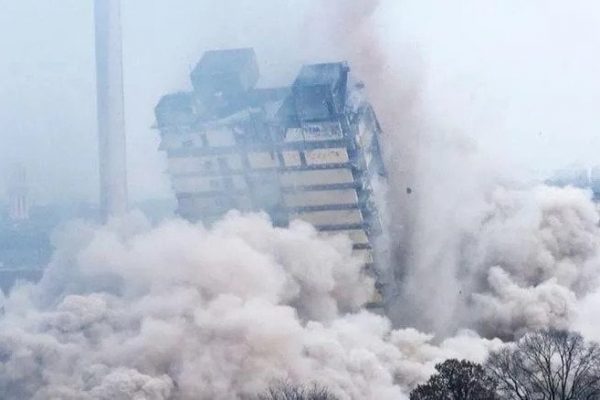 These two towers, Apex and Cheyanne, were demolished as a result of a group of mostly elderly people’s tenacious pursuit of justice. These men pursued justice despite obstacles including their advanced age, extensive travel, and few resources.

The Supreme Court ruled that the construction on the grounds of the Emerald Court society was improper and issued an order for its removal. Under the direction of the Noida Authority, the business will demolish the buildings at no cost to itself.

The society had 660 apartments spread out over 15 stories when residents first began to arrive. The formation of Apartment Owners Association (AOA) was largely composed of senior residents.

Residents felt duped right away since the builders didn’t deliver what they had promised. They would enjoy a lavish lifestyle surrounded by 82% open space, as Supertech had promised.

The Supreme Court has ordered that the Noida Twin Towers, the tallest structure in India and even taller than Qutub Minar, be demolished on August 28.

They would be destroyed with at least 3,700 kg of explosives on Sunday. Within the next two to three days, the explosive wire connections that have been installed on every floor will be finished. Explosives have been placed inside the Twin Towers during the past two weeks. The task will be completed in 9 seconds.

The two 40-story towers that are located on the Noida-Greater Noida expressway and are a part of Supertech’s Emerald Court project have approximately 900 apartments spread across an area of roughly 7.5 lakh square feet.

Why is the Noida Twin Towers being demolished?

Due to major code violations, the twin towers are being dismantled. The Supreme Court ordered Supertech to demolish the buildings at its own expense under the direction of the Noida Authority after finding “nefarious collusion” between the two parties.

In 2004, it was suggested to construct the housing society known as “Supertech Emerald Court” in Noida’s Sector 93A. The construction design, which included 14 towers and nine stories, was approved by the Noida authorities the next year.

Though this strategy was later altered. The updated proposal was examined by the Noida authorities in 2012, and it included a 40-floor height restriction for the twin skyscrapers.

After that, the society’s Residents’ Welfare Association (RWA) filed a petition with the Allahabad High Court claiming that the construction was unlawful. The authority was ordered by the court to demolish the twin buildings within four months (at its own expense) of the order’s filing in 2014.

Additionally, it had instructed the builder to reimburse the funds made by flat buyers with a 14% interest charge.

Later, in August 2021, the Supreme Court affirmed the Allahabad High Court’s decision and ordered the structures to be demolished, stating that they had been built in violation of the regulations.

The Supreme Court has stated that August 28 may be upheld as the date of demolition, with a “bandwidth of seven days” between August 29 and September 4 to accommodate for any minor lag times caused by weather or technical difficulties.

The locals were also put off by the state of the community during the 2010 monsoons. Some folks had to use boats to enter their automobiles since the basements were underwater.

Soon later, in 2010, the developer began excavating more land where a shopping center and garden were intended. They later learned that the developer had plans to erect Apex and Cheyanne, two additional 40-floor structures, nearby.

The twin towers are about nine meters apart from Aster-2. The National Building Code of 2005 and the Noida authorities’ own development regulations both stipulate that there must be a minimum of a 16-meter space between two residential structures. One of the main arguments made by the residents contributed to the case’s success.

They contacted the police, the Noida authorities, and the builders but received no satisfactory reply. The majority of people who live at Emerald Court are former government employees. Other individuals who were active besides the four named were Vashisht Sharma (60), Rajpal Tandon (85), and Gaurav Devnath (50).

They took third-class trains to the Allahabad High Court sessions, according to Teotia, a former DIG with the CRPF.

Supertech had already built 13 stories by this point. The towers were to be demolished once the top court issued a ruling in favor of the association two years later. In addition, the court criticized the Noida Authority and ordered the builder to compensate the purchasers. But the locals’ problems weren’t yet done. The Supreme Court heard an appeal from Supertech and Noida Authority over the HC decision.

The Supreme Court held more than 30 hearings during the seven-year legal battle.

The cost of the legal defense came to approximately Rs 1 crore. The project was led and funds were raised by MK Jain, who passed away in 2021 as a result of COVID. They rapped on each apartment’s door.

They also had to raise money for another round after this. Each apartment owner spent between Rs. 17,000 and 20,000. The Supreme Court upheld the High Court’s 2014 ruling in August 2021. The alleged corruption by Noida authority officials, according to the court, is the court of corruption. The Supreme Court ordered that the whole sum paid by home buyers be reimbursed, plus 12% interest. Additionally, they mandated that the Emerald Court RWA be compensated with Rs 2 crores.

On Sunday, a nine-year court battle for this group of older folks came to a conclusion.

This presented a challenge to Bajaj, which they met head-on.