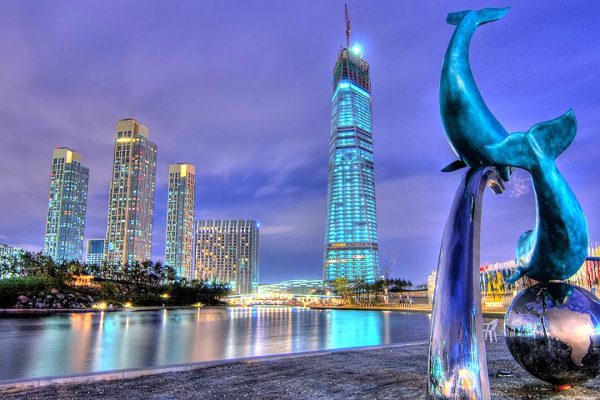 To assist its slow economy in taking a giant leap ahead, the government of South Korea has devised innovative development plans. These policies include accelerating digital transformation and securing future technologies such as aerospace and artificial intelligence.

The nation aims to gain a competitive advantage over other countries by securing forward-looking technology, undergoing digital transformation, and further expanding the country’s prowess in the production of chips and display panels. This objective will be accomplished through the “New Growth 4.0 Strategy,” which was presented by ministries responsible for the economy on Wednesday.

In accordance with the strategy envisioned by the government, 15 projects have been chosen for short-term and long-term objectives that range from one year to ten years in duration.

According to a statement made by the Ministry of Economy and Finance, the expansion of new growth engines will be centered on core areas such as mobility, space, and quantum computing. This is because securing future cutting-edge technology will determine a country’s ability to compete internationally.

The government said that the country’s potential growth rate has been progressively decreasing, which served as the background for the introduction of such a strategy, as the country’s labor force has been becoming older and the fertility rate has plummeted to the lowest level in the world.

According to the statement made by the ministry, “The private sector has lost vigor and impetus for making a fresh leap ahead has diminished due to heavy regulation, greater dependency on state support, and rising internal and foreign uncertainty.”

According to what was indicated, the role of the private sector will be expanded while the project is being carried out, and the government will offer assistance in the form of infrastructure maintenance.

The semiconductors and display panel industries, which are the primary drivers of industrial growth in the Korean economy, will be the focus of the government’s efforts to encourage those industries to further consolidate their footholds and take over new international markets ahead of their competitors.

In order to accomplish what has to be done, a supplementary high-tech semiconductor industrial complex will be built. The display industry will be recognized as a national strategic technology, which would allow the government to provide financial incentives for facility investment and tax breaks for company research and development.

A bio cluster similar to the one in Boston, Massachusetts, which is home to over one thousand pharmaceutical and biotech enterprises, will be constructed in South Korea by the year 2025. For the purpose of establishing a data bank, the genetic and clinical information of more than one million individuals will be gathered.

By the year 2030, the infrastructure necessary for autonomous driving will have been finished being built. This will include cooperative intelligent transport systems, which will enable road users and traffic administrators to exchange information.

It is anticipated that a private urban air transportation service will go into commercial operation by the year 2025.

In order for the nation to accomplish the goals it has set for its own autonomous space program, it plans to work toward the creation and launch of a rocket and lunar module of the next generation that are both made inside the country.

It plans to complete the development of a quantum computer with 50 qubits and three prototypes of quantum sensors by the years 2026 and 2027, respectively. The quantum sensors will be used to identify flaws in batteries and semiconductors.

In the fields of pharmaceuticals and medicine, efforts will be focused on the creation of innovative treatments for regenerative medicine as well as the installation of novel detection and response mechanisms for infectious diseases.

In order to quicken the pace of digital innovation in people’s day-to-day lives, the government will collaborate with private businesses to raise the level of artificial intelligence and data utilization to the highest level in the world, and it will also construct a high-speed network to facilitate this endeavor.

The plan also includes the establishment of a high-efficiency data center that makes use of locally produced AI chips and the creation of AI services that are connected to the cloud.

By the year 2025, the government intends to develop a national data infrastructure with the goal of enhancing the accessibility of data. This infrastructure would integrate disparate data found on public and private data platforms and portals.

In the field of logistics, cutting-edge technology such as artificial intelligence (AI) will be deployed in order to reduce delivery times while also lowering prices.

Both Busan New Port and Jinhae New Port will undergo a transformation to become “smart megaports,” which will result in the introduction of innovative new services in the field of logistics that make use of delivery robots and drones.

Authorities will concentrate on infrastructure such as research and development, human resources, financial innovation, and regulatory innovation in order to support the initiative known as “New Growth 4.0 Strategy.”

The ministry has said that it would examine ways to cut down on the amount of bureaucracy around several businesses, including biohealth, transportation, energy, tourism, finance, media, and content.