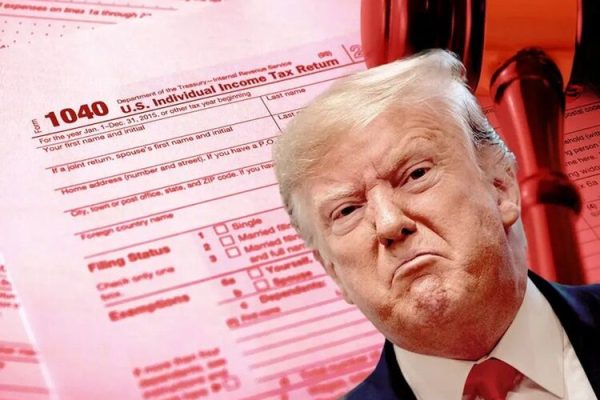 After years of legal and political warfare that began while he was still president, a House committee decided to make public years of tax returns acquired from former President Donald Trump.

The Ways and Means Committee, which is in charge of tax matters, voted 24-16 behind closed doors on Tuesday, in what was widely seen as the final chance for the Democrat-led panel to bring up the subject.

Richard Neal, a Democrat from Massachusetts and chairman of the committee, has said that a summary of Trump’s tax returns between 2015 and 2021, while he was campaigning for president and serving as president, would be largely redacted and provided within days.

After the midterm elections in November, the Republicans are projected to gain control of the House of Representatives in the next January. Republicans have criticized the vote on Tuesday, calling it political.

Republican committee leader Kevin Brady of Texas expressed concern that the decision will spark a cycle of political vengeance in the legislature.

Trump, who has already declared his desire to seek reelection as president in 2024, will likewise be the subject of more scrutiny as a result.

In a political battle that lasted three years, the former president’s six years’ worth of tax returns and those of some of his businesses were at issue.

In 2019, the committee asked for Trump’s tax returns as part of an inquiry into his administration’s tax compliance and the IRS’s audit program (IRS).

In contrast, Trump’s tax documents were withheld by the Treasury Department at the time. Trump had previously said he was under audit by the IRS and couldn’t release the records.

The committee did, however, determine that the IRS violated its own procedures by failing to examine Trump’s tax returns for three of his four years in office.

It took the IRS until April 3, 2019—more than two years into Trump’s presidency and just months after Democrats took control of the House—to begin auditing Trump’s 2016 tax filings, despite the report indicating that the Trump administration may have disregarded an IRS requirement dating back to 1977 that mandates audits of a president’s tax filings.

There was no evidence to support the claim that Trump attempted to influence or prevent the IRS from studying his tax returns. The audit process was deemed to be “dormant, at best,” however, according to the study.

Trump’s refusal to submit his tax returns broke with a longstanding bipartisan norm that had existed since at least the 1970s, when prominent presidential contenders like Jimmy Carter began publishing their tax returns.

Trump’s reelection attempt in 2020 failed, and the next government of Democrat Joe Biden has made clear that it supports the Ways and Means Committee’s authority to examine the tax returns of any American citizen.

To prevent this, Trump has taken the matter to court, claiming he is the target of a politically motivated campaign. However, lower courts agreed with the committee that it had extensive jurisdiction to acquire tax information.

Trump’s legal team immediately filed an emergency request to halt the leak. Supreme Court Chief Justice John Roberts said on November 1 that the court would temporarily halt the transfer of the records while it evaluated the issues surrounding the case.

The Supreme Court lifted the hold without noting any disagreement on November 22, enabling the committee to view the tax information.

Committee head Neal hailed the decision as a “win” for government transparency and accountability.

Ultimately, “we realized the strength of our case, we stayed the course, followed the advice of counsel, and ultimately, our case has been upheld by the highest court in the nation,” Neal said in a statement. This goes beyond partisanship, and the Committee will finally provide the oversight we’ve been asking for for the last 3.5 years.

There are other inquiries of Trump’s economic practices, including the one being conducted by the committee. In September 2022, New York Attorney General Letitia James sued Trump and the Trump Organization for alleged financial wrongdoing.

As part of a criminal investigation of the former president and his namesake company, Manhattan District Attorney Cyrus Vance got eight years of Trump’s tax papers in 2021.

Vance’s team filed a subpoena for the data 18 months previously, but Trump’s legal team tried to claim presidential immunity to halt the probe, which looked into allegations of falsification of company records and tax fraud, among other alleged crimes.

Alvin Bragg, Vance’s successor, obtained a guilty judgment against the Trump Organization on December 6 for engaging in a criminal plot to deceive the tax authorities over a period of 15 years. President Trump was not personally implicated in the scandal.

Tax documents for Trump were not made public in either that case or Vance’s probe. The New York Times did, however, manage to get the former president’s personal and business tax documents spanning decades.

In 2018, the study was awarded the Pulitzer Prize for reporting. Another report will be released in 2020. To protect its unidentified sources “who have taken significant personal risks to enlighten the public,” the publication did not publish the papers themselves.

After deducting millions of dollars in losses, Trump filed his taxes for the first time in 2020 and disclosed that he had paid just $750 in federal income tax in both 2016 and 2017.

Trump has dismissed the Times’ reporting as “fake news,” his words exactly. In the realm of fiction. Fake.”

Neal said that the Times’ revelation reflected the inequity in American culture and urged his committee to keep investigating Trump’s tax returns.

During that time, Neal made a statement in which he claimed that the findings “sheds a bright light on the substantially different experience persons with power and influence have when engaging with the Internal Revenue Service (IRS) than the ordinary American taxpayer.”

Apparently, “the President has gamed the tax rules to his benefit and utilized legal challenges to postpone or avoid paying what he owes.”

A separate Justice Department investigation into Trump’s handling of secret materials is ongoing.

On Monday, a House panel looking into the January 6, 2021 assault on the US Capitol suggested criminal charges be brought against the former president, albeit such a recommendation would not have any legal weight.