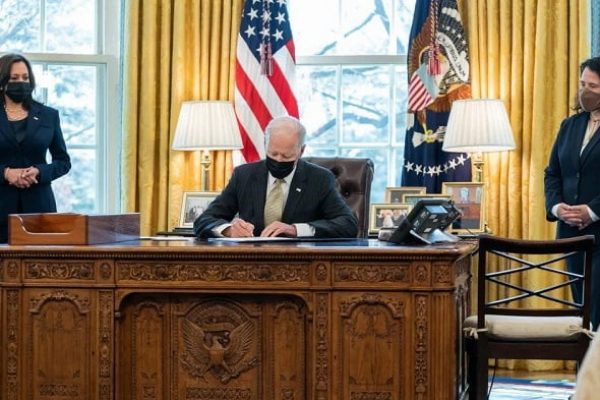 As a result of President Joe Biden’s decision to overturn a policy that made it more difficult for low-income immigrants to receive green cards, the mayor of Washington, D.C., Muriel Bowser, has taken emergency steps in response to migrants who have been bused in from Arizona and Texas.

Thursday, Mayor Muriel Bowser of the District of Columbia declared a state of emergency, which freed up $10 million to address what she referred to as a “humanitarian crisis.” This crisis was caused by the influx of migrants that were sent by two Republican governors of border states to protest the immigration policies of the Biden administration. The declaration made by Bowser occurred on the same day that the White House finished reversing a strict policy that had been in place under the administration of previous President Donald Trump. This policy had denied permanent residency to certain immigrants who accepted public services.

At a news conference, Bowser said that one component of her reaction would be the establishment of a new Office of Migrant Services. This office will be tasked with providing assistance to the approximately 9,400 immigrants who will be bused to the nation’s capital. She said that the majority of the individuals who were bused in go on to other locations, but the newly opened office would collaborate with charitable organisations to satisfy their needs.

Bowser said that they are aware of the fact that they do not know everything that is coming into the district and that they do not have control over it. However, we do have the ability to regulate the degree to which our core beliefs are reflected in all that we do.

She went on to say that the reaction from the federal government to the challenge posed by the District of Columbia “has been insufficient in certain aspects.”

In July, Bowser made a request for assistance to both the National Guard and the White House, stating that the influx of migrants posed a risk of overwhelming the district’s social services. After one month, she submitted her request to the Pentagon, but it was denied.

In the spring of this year, the governors of Texas and Arizona, Greg Abbott and Doug Ducey, started paying for buses to transport migrants who may have entered the nation illegally to New York City and Washington, D.C. respectively.
In April, Abbott stated that the state of Texas had been “overwhelmed by hordes of illegal immigrants who are being dropped off by the Biden administration.” He also stated that “the [White House] will be able to more immediately address the needs of the people that they are allowing to come across our border.”

The Republican Party is furious over President Trump’s immigration policies, and the president has pledged to reverse them. The prior policy that prevented migrants from entering the United States as a COVID-19 health precaution was revoked in April by the administration of Vice President Joe Biden.

On Thursday, the United States Department of Homeland Security made the announcement that it had completed reversing the “public charge” regulation that had been implemented by the Trump administration, therefore reinstating the historical use of the word. Someone who is dependent on public assistance is known as a public charge.

In a statement announcing the revision to the regulation, Secretary of Homeland Security Alejandro Mayorkas stated, “This move assures fair and humanitarian treatment of legal immigrants and their family members who are citizens of the United States.” We will not punish people for choosing to utilise the health benefits and other additional government services that are available to them. This policy is in line with the fundamental principles that underpin the United States of America.

Immigrants who received benefits, such as housing, Medicaid, and the Supplemental Nutrition Assistance Program (SNAP), were deemed ineligible for green cards or temporary visas to remain in the United States under Trump’s policy. This was the case even if the immigrants had been here for a long time.

The policy that was in place throughout the Trump administration was justified by its defenders by stating that it fostered independence. But its detractors, including Governor Ducey, said that it unfairly targeted immigrants with low incomes. The governor of Arizona said to KAWC that the United States needs individuals with less experience who “will climb the economic ladder.”